From the COVID-19 pandemic, to helping small businesses and addressing transportation issues, the mayors see opportunities to work together. 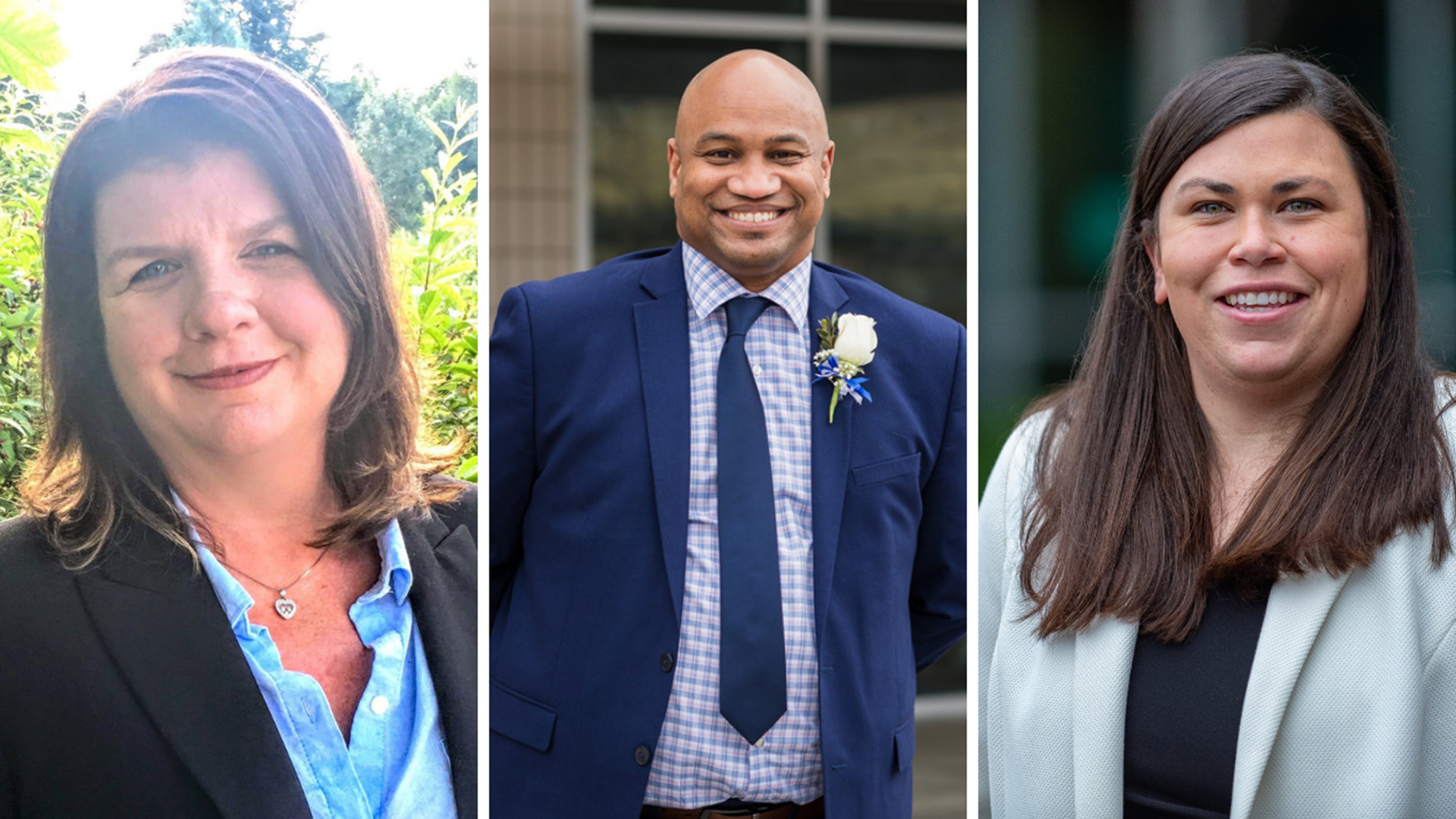 PORTLAND, Ore. — The mayors of Gresham, Beaverton and West Linn all have something in common. They are first-term mayors who took office in January and are breaking barriers. Mayor Travis Stovall is the first Black mayor of Gresham, Oregon's fourth largest city. Mayor Lacey Beaty is the first woman to be mayor of Beaverton, the state's sixth largest city. Beaty and the new mayor of West Linn, Jules Walters, are among just four women in the Metropolitan Mayors Consortium, which represents 26 cities in the Portland-Vancouver region.

They also see opportunities to work together on issues of common interest. The three mayors were guests on this week's episode of KGW's Straight Talk with Laural Porter.

The trio of mayors were sworn in to lead their cities in early January and all say the first month has been a whirlwind getting up to speed. For Mayor Beaty, that busy month ended in a weekend skiing accident on Timberline. She tore her meniscus and was scheduled for surgery Friday.

"I'm doing OK," she said. "They say never take the last run. Toward the end of the day in the slush, I caught an edge and tore my meniscus and that was how my first month as mayor ended."

Beaty said she's spent a lot of her first weeks in office explaining to businesses and other officials the city interacts with how their new system of government works. Beaverton voters approved a city charter change to a mayor-city manager form of government with a full-time mayor. She's also spending a lot of time listening to people.

"After running a year-long campaign, I feel like people know everything about me in the community, so I thought it was a good time to learn about everyone else," she said.

A hectic start for Stovall

Mayor Travis Stovall didn't know if he'd won the mayor's race until a month after the Nov. 3 election. The race between him and City Councilor Eddy Morales was so close, there was an official recount. Stovall ended up winning by just 13 votes. Because former mayor Shane Bemis resigned from the position in June, Gresham was without a permanent mayor for about six months.

"So, a lot of things were on hold until the new mayor was in place," Stovall explained. "Because of that logjam, everything is really coming to fruition. I had to make a lot of decisions in a very short time."

While it's been a hectic month, Stovall said he's excited about the opportunities ahead for Gresham.

Like Beaverton's Mayor Beaty, West Linn's new mayor, Jules Walters, served on the city council before becoming mayor. The West Linn mayor's position is part-time, but the workload is a full plate.

"It's a tremendous workload in the beginning," she said. "Your inbox blows up the minute you win election, and it's the process of making the phone calls and having the important conversations."

West Linn has a new leadership team and a new city manager, and acting police chief. Walters called it an opportunity to chart a new course for the city.

Travis Stovall is the first Black mayor in Gresham and of any large city in the Portland area. He called it an honor and he's already seeing the impact it's having on young people.

"This morning I spent time with a middle-schooler, a young woman of color," he said. "Her questions surrounded the opportunities that now exist because a person of color is now leading the city she's a part of."

Stovall called his election a reflection of the changing fabric and diversity that exists in Gresham.

"It's not just folks saying we need to have some change, but understanding the changes that are happening and embracing the rich diversity in our city and region," Stovall said.

Beaty has a poster of Vice President Kamala Harris in her office with her now famous quote, "I might be the first woman to hold this office, but I won't be the last."

Beaty, who has a 3-year-old daughter, said she kept her in mind when she voted in the election, from the presidential ticket to the local school board.

"You can't be what you can't see," Beaty said. "I think as a working mom, as a young mom, I bring such a different perspective than we've ever had in the city. It's unique and it's different, but it shouldn't be special. I hope for the day it's not special anymore."

West Linn's Mayor Walters: 'We need to have representation of everybody'

West Linn's mayor and city council positions are part-time and mostly volunteer. The mayor and council receive small stipends. The mayor's is $6,000 a year. She'd like to see future elected leaders receive better compensation to make it possible for more people to serve.

"That sort of leaves out a lot of people from being able to participate," Watlers said. "If you are a working parent, you don't have the same level of income. You need to be able to compensate them, at least for day care while they are at council meetings," Walters said.

Walters said the community is better when there are more voices.

The pandemic is the overarching issue the mayors are focused on.

Mayor Beaty said in Beaverton, as it is across the state, the vaccine rollout has been slow. But the city has no control over the order of vaccinating people. Where they have input is on where the vaccinations happen. Beaty wants to make sure Beaverton and Washington County have representation for a vaccine clinic.

"Because right now, it's mostly in Multnomah County and that's a real challenge for working families in Washington County to get down to the convention center or the airport," Beaty said.

RELATED: Here's how Portland metro area residents can register for the COVID-19 vaccine

Gresham Mayor Stovall is concerned about the impact pandemic restrictions have had on small and medium businesses in Gresham, which make up a sizable part of the city's economic engine. He questioned the one size fits all approach to the restrictions and called on assistance from the state and federal governments.

"It's been challenging and we are going to have to make sure that we are very cognizant of the challenges suburban cities face which rely on small and medium businesses," Stovall said. "We need to come out of this in a way that preserves jobs and absolutely allows us to continue to move towards a vibrant community."

Mayor Jules Walters also sees the impact the pandemic has had on West Linn's businesses.

"We have just authorized $200,000 in emergency business grants that will be doled out over the next month. And that I think will barely scratch the surface," she said.

Her other concern has been the impact school closures have had on families. She said West Linn has a lot of working families, and having kids at home has been difficult.

"We understand that's the safe and proper way to handle a pandemic. People are ready for schools to reopen. We will see how that rolls out, hopefully safety and effectively," she said.

As suburban cities, the mayors see opportunities to work together on shared challenges such as supporting their small and medium sized businesses and on transportation issues.

"We are all part of this metropolitan region and there's a lot of connectivity there," West Linn's Walters said.

One area she sees them working together is on transportation issues. She expressed disappointment in the failure of the Metro transportation bond in November that would have meant funding for regional projects, including in West Linn.

"This is a great way to reach out with our regional partners and find ways we can help each other to solve some of these problems, congestion, making sure we have proper access and equitable access to public transit," she said.

Walters said West Linn residents are especially concerned about the possibility of tolling on I-205 which she said would have and extremely negative impact on West Linn's livability and economic development.

"You've got to make decisions quickly. You need to have a peer group to reach out to. I think that's what a lot of us are doing," she said.

When asked what their one wish would be for their city in 2021, Mayor Beaty said she's not much of a wisher, but rather a hard worker, but if she could wave a magic want it would be that Beaverton could come together and be more inclusive.

"We are a really diverse city and we are making really great in-roads. We have to focus on our similarities and not our differences," she said.

Mayor Walters said she hopes West Linn comes out of the pandemic a stronger, better community.

"A lot of people have been affected around the world. I have members of my family who have had COVID, I've lost a family friend to COVID. At the end of the day, I hope it brings us closer as a community," she said.

Mayor Stovall wishes for a comprehensive response to pandemic recovery for Gresham.

"One that is absolutely inclusive like we've never seen before. That's really the driving wish I have for our city and for our region," Stovall said.

The Mayors also shared fun facts about themselves.

Travis Stovall is a pilot.

"I love to fly airplanes. I sometimes tell people that and they're surprised. I like aviation and I love flying planes," he said.

"I owned a bakery and catering company and made wedding cakes," she said.

Lacey Beaty said she's known Walters for a long time but didn't know that about her. And Mayor Beaty's fun fact may take the cake.

"Most people know I am an adrenaline junkie. So, for our honeymoon, my husband and I went to Spain and ran with the bulls," she said.

The mayors also discussed their cities' approach to police reform and climate change.

Mayor Walters gave an update on how the city of West Linn is making changes following the wrongful arrest and racial discrimination of Michael Fesser.

Straight Talk airs Friday at 7 p.m., and Saturday and Sunday at 6:30 p.m.
Straight Talk is also available as a podcast.