Candidates for Oregon Secretary of State make their case to voters

The secretary of state oversees elections, audits, archives and the business registry. They also hold a position on the state land board along with the governor. 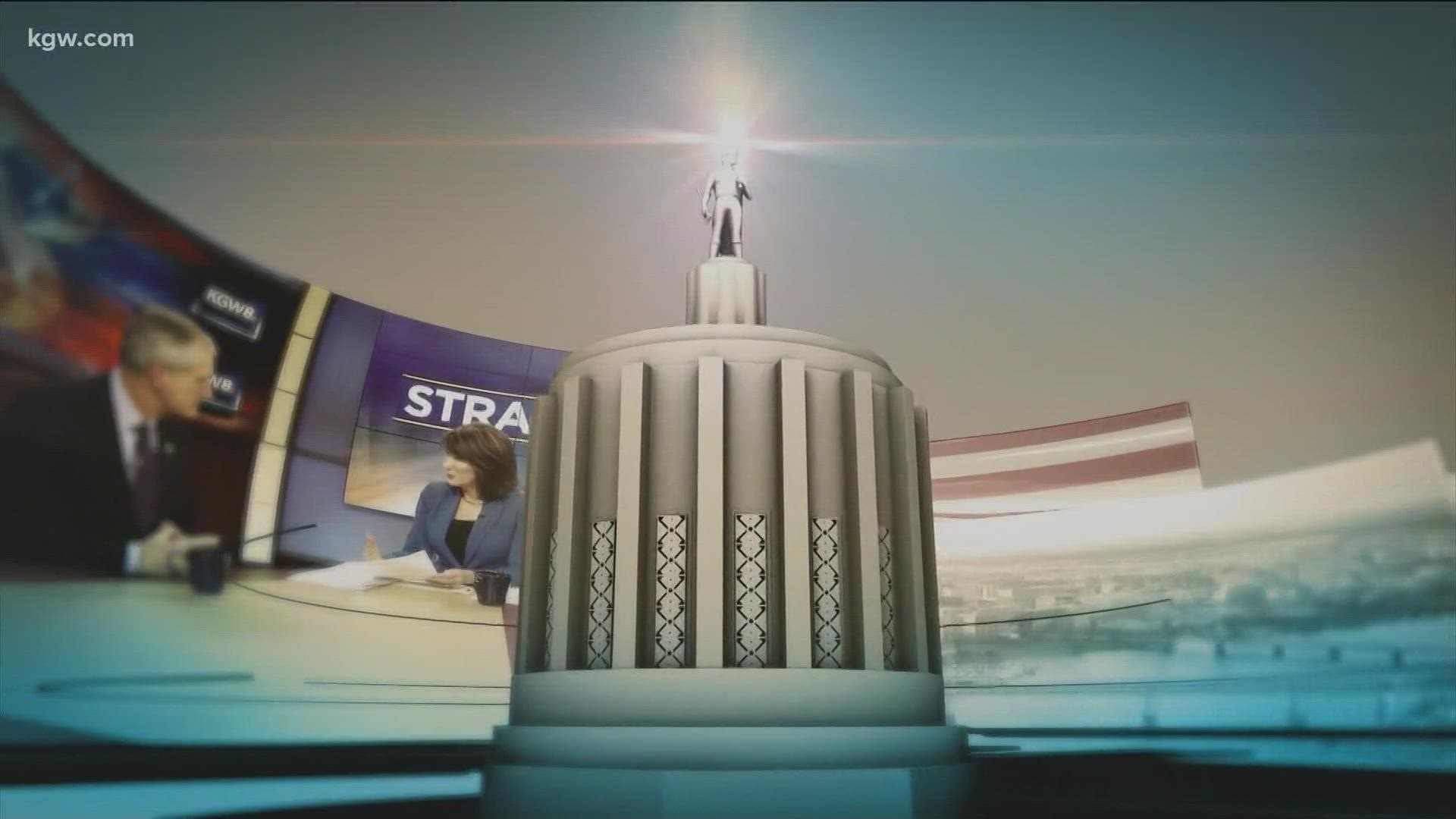 PORTLAND, Ore — Two state senators, Shemia Fagan of Happy Valley, and Kim Thatcher of Keizer are battling it out to be Oregon's next secretary of state.

It's arguably the most important race on the state's ballot this election and the race has attracted big money on both sides.

The job of Oregon secretary of state

Whoever wins is next-in-line to the governor. They would assume the position if the governor leaves office or dies while serving.

We saw that happen when then-Secretary of State Kate Brown became governor when John Kitzhaber resigned in 2015.

The secretary of state also oversees elections, audits, archives and the business registry. They also hold a position on the state land board along with the governor and state treasurer. And following the 2020 census, the secretary of state might also be charged with redrawing legislative district boundaries if the legislature can't agree on a redistricting plan.

The position is currently held by Republican Bev Clarno, who was appointed to the post when Republican Secretary of State Dennis Richardson died of cancer in 2019.

Gov. Brown chose Clarno with the stipulation that she not run for election. So, this is an open seat.

It's the only statewide seat held by Republicans in Oregon and the GOP would love to keep it. The Democratic party is fighting hard to win it back.

In this week's episode of Straight Talk, candidates Shemia Fagan and Kim Thatcher drew clear distinctions between themselves.

Senator Thatcher, a small business owner, said she's the only one in the race who would carry on the legacy of the late Dennis Richardson.

Richardson was the first Republican to hold the office in Oregon in four decades.

"I would carry on his legacy of accountability, transparency and integrity," Thatcher said. "I've built a 16-year track record of steady leadership. Both my opponent and I served with Dennis Richardson, but I received the endorsement of Dennis's wife, Cathy."

Senator Fagan points to her difficult childhood being raised by her father while her mother battled addiction and homelessness, and how it has shaped her career and policies.

"The summer before I started second grade, I remember my dad took us on a long camping trip," Fagan said. "I remember a couple of weeks in the woods catching crawdads and sleeping in a big family tent. Years later, my brothers told us we had been evicted from our home in the Dalles and we had nowhere to go."

Fagan said that background has motivated her to work to better the lives of everyday Oregonians.

"I've spent my career as a lawmaker and civil rights attorney fighting for families who are hanging on by a thread like mine was. Passing policies like paid sick leave, creating the office of small business assistance, and most important in this race knocking down barriers to voting," she said.

Both candidates praised Oregon's vote-by-mail system and said they have no doubts it will work as it should and every vote will be counted in this election.

However, Senator Thatcher thought the state could do more to get information to people impacted by the wildfires to let them know they can pick up a ballot at any county clerk's office.

"If elections officials had been more informative with the people who've been displaced by the wildfires I think a lot more of them would be voting right now," she said.

She also said as secretary of state she'd want to give Oregon's elections system a top-to-bottom check to make sure it's as secure as possible.

Senator Fagan, who supported automatic voter registration in 2015, which Thatcher opposed, said she would work to make it even easier for people to vote.

"This is a place where my colleague and I disagree. I don't believe expanding voter rights should be a partisan issue," Fagan said.

The number one job of the secretary of state is the state's elections chief, and to administer the job in as unbiased a manner as possible.

In their endorsements, newspaper editorial boards have expressed concern both Fagan and Thatcher have highly partisan records.

Senator Fagan has received hundreds of thousands of dollars in campaign contributions from the state's public employee unions.

Thatcher has received money from timber groups and the Oregon Firearms Federation.

Fagan defended her support from unions.

"I'm proud to be supported by a very broad coalition of supporters in this race. It's really multi-partisan. Firefighters, carpenters, the building trades. Nurses. I'm proud to have always had the support of Oregon's working people," she said.

Fagan also pointed out her independence during her political career and in many of her votes.

"I have been the lone 'no' vote in my party on multiple occasions. In fact, I'm in the Senate because I ran against a democratic incumbent who was a member of the leadership. And I worked with Republicans to pass the National Popular Vote Compact over the objections of three of the most powerful Democrats in the senate," Fagan said.

Critics have had concerns about Thatcher's partisanship, as well. She was part of the Republican walkouts three times during legislative sessions.

Thatcher said the walkouts are part of the process.

"Sometimes, it's the nuclear option. There were some really big issues that people were being blocked from weighing in on. And I mean the voters of Oregon. Sometimes there are questions that are bigger than the legislature," Thatcher said.

Helping Oregon through the pandemic

Both candidates feel the secretary of state can play a role in helping the state navigate tough economic times ahead caused by the COVID-19 crisis.

Thatcher said the audit division and its staff will be available to help inform budget decisions.

She also said the audit division needs to look into how the state is responding to the emergency and she used schools as an example.

"We've got all kinds of things that need to be looked at. Kids aren't even in school. A lot of kids can't get on the internet. Kids are getting left behind. I haven't taken money from the education unions like my opponent. They're the ones who don't want you to know how schools are failing," Thatcher said.

Fagan said the small business assistance office in the secretary of state's office could be a big help to businesses during the pandemic.

She said the first bill she co-sponsored in her freshman year in the legislature created the office.

"It's essentially a one stop shop for Oregon's small businesses, which are the engine of our economy. As secretary of state, I'm going to make sure that office is fully staffed as we work to help families get back on track and get small businesses back up," Fagan said.

When given the opportunity to question each other, Thatcher asked Fagan about a traffic ticket she received on her way to a legislative session. She said Fagan used her position to get off easy on the ticket.

Fagan responded by saying it was a silly question and a repeat of a 2014 attack against her. She explained it was for a speeding ticket that she later paid and said she never used her office for political gain.

"So, this is a silly attack. And really you should take those ads down because it cries desperation," she said.

Fagan asked Thatcher whether she supports President Trump excluding people from the 2020 census who are living in the U.S. without documentation. Fagan called it an important question since the secretary of state may be in charge of redistricting after the census.

Thatcher said she thinks all people in the U.S. should be counted, but that she thinks it should be indicated whether they are citizens or not.

"I think that's important because I think people who are citizens should be voting and people who are not members of the United States should not be voting. But I have no problem with counting people," Thatcher said.

In closing, Senator Thatcher said she is the candidate in the race who will be most like the late Republican Secretary of State Dennis Richardson.

"I am not beholden to the $50,000 the governor gave me. I'm not beholden to big government interests, but I am proud 99% of my donations have come from inside Oregon. If you want to get back on track, vote for me," she said.

Fagan said elections are about choices and there's a clear choice between candidates in this race.

"You have a choice between a candidate who votes with her party to restrict voting access and one who leads the fight to expand it.

I'm proud to be endorsed by the Oregon League of Conservation voters, Senators Wyden and Merkley, the firefighters, teachers, and nurses. But I'm not done until I can add you," Fagan said.