DeFazio v. Skarlatos: Oregon's most expensive US House race ever goes down to the wire 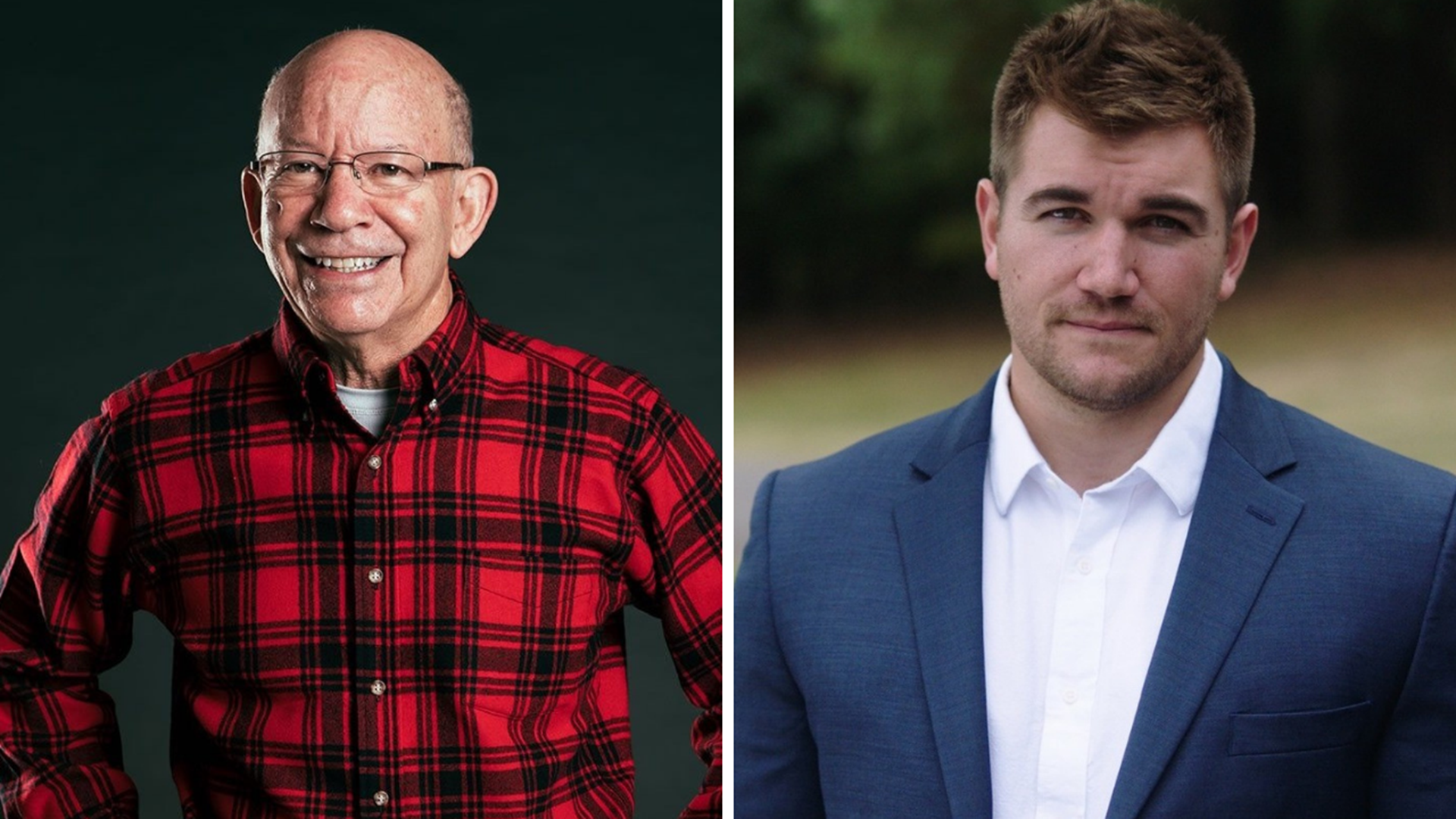 PORTLAND, Ore. — Oregon 4th District Congressman Peter DeFazio, a Democrat, was in his third term in Congress when his Republican challenger, Alek Skarlatos, was born.

Now, seeking his 17th term, DeFazio is in the political race of his career. Both candidates were guests this week on "Straight Talk."

The race is attracting national attention and big money from the Republican Party that sees a chance to flip a seat in the closely-divided and diverse district that includes Coos, Benton, Douglas, Lane and Curry counties, as well as parts of Linn and Josephine counties.

President Donald Trump only lost the district by one-tenth of a point in 2016.

The contest is seen as so close, the influential non-partisan Cook Political Report has changed its rating of the DeFazio-Skarlatos race from "likely Democratic" to the less certain "lean Democratic."

Television viewers in the Portland market are seeing political ads they have rarely seen from the state's 4th District as the candidates vie for the voters in a small portion of Linn County in the Portland viewing area.

DeFazio said he knows he's fighting for every vote.

“It is a very competitive race. My district is purple at best. Partisan attitudes have hardened. Hillary Clinton only won the district by 552 votes. Obviously, I do very well with Democrats. We're working hard to get some Independents and moderate Republicans," he said.

The Republican Party sees the 28-year-old Skarlatos, of Roseburg, as a rising star in the party and is capitalizing on his image as an American hero.

Skarlatos, a former National Guardsman, gained international fame when he and two fellow service members helped stop a terrorist attack on a train bound for Paris in 2015.

He starred as himself in a Clint Eastwood movie about the incident, "The 15:17 to Paris." He also finished third in a "Dancing with the Stars" competition the same year.

Skarlotos said he never dreamed he would end up in politics, but he felt a call to serve his district.

"I never wanted to get involved in politics," he said. "It was the farthest thing from my mind. I think it's a very dirty business. I think the only thing that tipped the scales for me to get involved is seeing how tough a time my congressional district has had for, frankly, the last 34 years Peter DeFazio has been in office," he said.

Voters of the 4th District

DeFazio said people in his district know where he stands and he criticized his opponent for not being forthright with voters.

Skarlatos said DeFazio is too far left for the district and has let his constituents down. He believes it's time for a change.

"At the end of the day, he's had 34 years to affect change in Oregon's 4th District and as a result we are the poorest congressional district in the state," Skarlatos said. "We have an incredibly high homeless rate. In fact, Eugene city limits has the highest homeless rate per capita in the country. We have high child abuse rates and unemployment rates."

"As a result of not managing forests properly and letting it burn, not even salvage logging to prevent forest fires, that affects the counties' tax base," he said.

DeFazio said he absolutely feels he represents the more conservative interests of his district fairly and that voters always know where he stands.

"Many times I've had Republicans walk up to me and say, 'Well, I didn't agree with that, but at least I know where you stand, unlike other politicians,'" he said.

DeFazio pointed to economic development jobs he said he brought to the coast and other parts of his district, and said he'll continue to do that as the chair of the powerful House Transportation and Infrastructure Committee.

On the response to the COVID-19 pandemic, Skarlatos said initially it was appropriate for the nation and Oregon to be extremely cautious, but now that’s it’s been eight months, he believes it’s time to modify the approach for a long-term response.

“To put it simply, we can’t afford to be locked down forever. We are passing these trillion-dollar bailout packages, and small businesses are going bankrupt or out of business. We can’t afford to maintain this overly defensive posture,” Skarlatos said.

He said if there’s a serious outbreak somewhere, he’d support a lockdown, but otherwise he said there needs to be a balanced long-term approach to dealing with the virus.

Asked whether he’d take an FDA-approved COVID vaccine, Skarlatos said he would.

“Yes, probably. It depends on whether it’s safe, but yes, I probably would,” he said.

“Simply because there are a lot of businesses trying to open up and they can’t find employees due to the added coronavirus unemployment benefits,” he said.

On the other hand, Congressman DeFazio voted for the House package in March that included the Paycheck Protection Program for small businesses and extended unemployment benefits. Those benefits have run out and DeFazio has been pushing for another stimulus relief package.

Skarlatos and DeFazio have sparred over the future of the Affordable Care Act (ACA). Skarlatos has said he wants to see the ACA repealed and replaced, a call Republicans have made for years, voting 71 times to repeal it.

DeFazio criticized his opponent's position and said Republicans have never had a plan to replace the ACA and doesn't think Skarlatos does either.

"I guess he's going to be the man who can write the replacement, unlike any other Republican House member, senator, the President of the United States, and the Secretary of Health and Human Services. I don't think so," DeFazio said.

"I don't know why we wouldn't try it," Skarlatos said. "I believe in a free market. I'm a capitalist. I think we should allow companies to compete across state lines. And if it doesn't reduce the cost, at least we tried and we can look at something else."

Skarlatos added the Affordable Care Act has added significantly to health care costs and people he knows who've had to buy their own health care plan have seen their premiums go up.

The Supreme Court will begin to hear arguments about the constitutionality of the Affordable Care Act on Nov. 10. It's unclear how the court will rule, but it's possible the ACA could be overturned.

When asked how he'd respond to constituents concerned that would mean the loss of their private insurance, be too expensive, and amount to a government takeover of health care, DeFazio said it's time for the U.S. to join the rest of the world in having inexpensive universal health care.

Television viewers likely have seen ads from the DeFazio campaign criticizing Skarlatos for not supporting a minimum wage. Over the years, DeFazio has supported increasing the federal minimum wage to a living wage.

“I don’t agree with minimum wage increases on the federal level. I don’t believe, frankly, in a federal minimum wage,” he said.

The federal minimum wage is currently $7.25 an hour. When asked if he was OKy with it dropping lower without a federal minimum standard, Skarlatos said it should be up to the states.

“If Nebraska thinks $7.25 is too high, it should be up to that state to determine what the minimum wage is," he said. "Who am I as a congressman from Oregon to tell Nebraska what their minimum wage should be?”

Skarlatos pointed out Oregon’s minimum wage is already significantly higher than the federal minimum, and instead of increasing that, he said he’d work to bring more family and living wage jobs to the 4th District.

Recent articles in salon.com and Newsweek reported some Democratic groups have hinted about possible ties between Skarlatos and extremist groups because of timber rallies he attended.

When asked whether he’d disavow those groups, including the Proud Boys and QAnon, Skarlatos was quick to distance himself from them and said he was only at the rallies to oppose the cap-and-trade bill Oregon Democrats were trying to pass.

“I disavow any group with a history of violent confrontations," Skarlatos said. "I disavow the Proud Boys. I disavow antifa. And I would challenge Peter DeFazio to do the same. That article was written because I attended a Timber Unity rally. That’s an anti-cap-and-trade movement and has nothing to do with QAnon, the Proud Boys, or any white supremacist organization."

The article said a photo on Skarlatos’ campaign Facebook page showed him posing with protesters holding a banner with the QAnon slogan last year. Skarlatos said he took pictures with many people at that rally and he’s not part of any movement.

As a veteran himself, Skarlatos puts a lot of emphasis on helping Oregon veterans. He said vets in the 4th District have a difficult time accessing the Veterans Administration services from the coast. He said he especially wants to help older Vietnam and World War II vets who may not have the ability or funds to commute two or three hours.

“I would look at either putting clinics on the coast or bring back some sort of  busing program to help them access the VA,” he said.

The Skarlatos campaign has criticized DeFazio for his support of the Green New Deal, a sweeping plan to cut fossil fuels. It’s a plan television ads for Skarlatos claim would kill the timber industry.

DeFazio said he has applied parts of the Green New Deal in his infrastructure bill which he said would create millions of jobs as the nation moves away from fossil fuels.

“I happen to believe climate change is an existential threat to the future of the planet and those wildfires we had this year, those weren’t natural," he said. "They are not normal. The towns of Talent and Phoenix burned. They’re not even forested."

Skarlatos has downplayed the role of climate change in Oregon’s wildfires and blamed poor forest management.

“In terms of timber, trees actually sequester carbon, particularly now with cross-laminated timber where we can build a 15-story or taller building, replacing concrete which contributes 7% of our carbon pollution in this country," he said. "We could be building them with cross-laminated timber which will sequester carbon for as long as the building stands."

DeFazio said use of cross-laminated timber products could be a potential boon for Oregon’s timber industry.

Skarlatos said the 4th District is ready for a change in a region that has become increasingly conservative.

“Peter DeFazio votes with AOC (Rep. Alexandria Ocasio-Cortez) 96% of the time and he co-sponsored the Green New Deal," Skarlatos said. "He’s the chairman of the Transportation and Infrastructure Committee and he can’t get his own bill out of committee. He’s way too far left for a district like this and he doesn’t represent rural Oregon any longer."

I think I am the one to do that,” Skarlatos said.

DeFazio said he’s worked hard for the diverse 4th District for many years.

“I don’t BS people," he said. "I tell them what I’m going to do and why I’m going to do it. I’ve brought economic development jobs to the coast and the rest of my district and I’ll continue to do that, particularly now that I am chair of the Transportation and Infrastructure Committee,” he said.

DeFazio said he has a bill for dredging harbors and rebuilding jetties, and another bill to rebuild crumbling bridges and highways, and wastewater systems.

“So, I’m asking for your vote one more time to go back and continue the fight,” DeFazio said.

Voters can find out more about the candidates on their websites.