The revolutionary cancer-fighting drug Gleevec was developed by OHSU’s Dr. Brian Druker, and set the stage for future discoveries in the quest to end cancer. 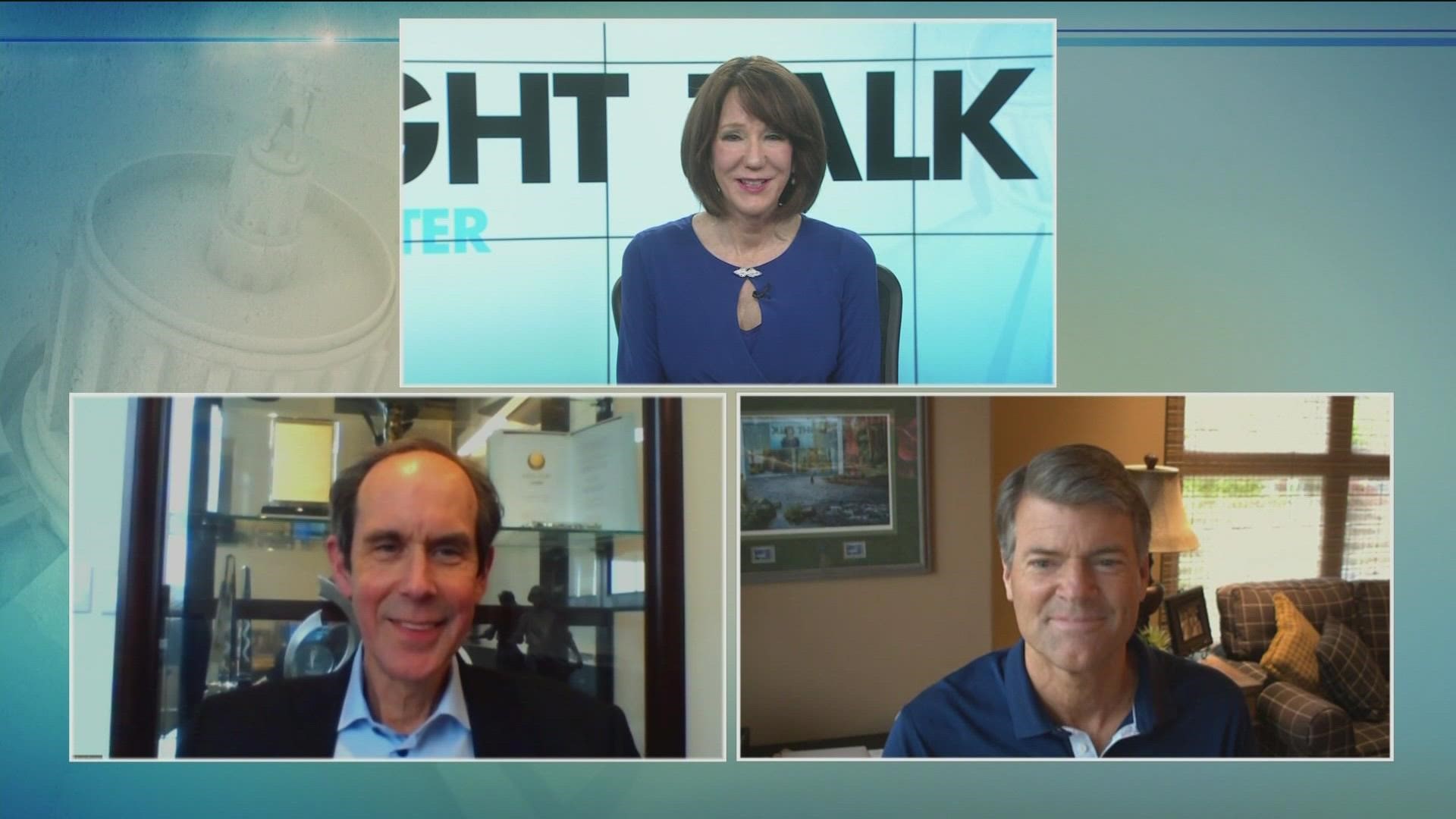 PORTLAND, Ore. — When Rob Shick was diagnosed with cancer, he thought it was time to make a plan for his family for a life without him.

"When you hear those words, it just stops your clock," Shick said.

"He handed me the keys to my life back. Simply put, he provided hope where I had none," he said.

The keys were a once-a-day pill called Gleevec, which targets the cells of the chronic myeloid leukemia that had invaded Shick's body.

"It really is like a silver bullet, just targeting the cancer and leaving normal cells alone," said Dr. Druker.

Shick's cancer diagnosis was 15 years ago. Thanks to the drug Dr. Druker pioneered, Shick has seen his three kids graduate from high school and college, get jobs, and he was able to walk his daughter down the aisle at her wedding.

"Those life events, it's hard to describe that," Shick said. "I'm just happy to be here and give back in any way I can."

Dr. Druker and Rob Shick were guests on this week's episode of "Straight Talk" to discuss how Gleevec has changed lives and led to other discoveries in the quest to end cancer as we know it.

The FDA approved Gleevec for use in patients with the once-deadly chronic myeloid leukemia (CML) on May 10, 2001. Since then, the drug has saved the lives of hundreds of thousands of people around the world.

"You look at all our patients 20 years later, all the births, grandkids, graduations, all the life events they've got to witness during their lives, it's absolutely remarkable," Druker said. "I'm just grateful to be a part of these breakthroughs, and I'm still grateful to see what's happening.

Before Druker developed Gleevec, CML was effectively a death sentence. Patients were told they had three to five years to live.

"The only effective treatment was a bone marrow transplant, and that had incredible hazards to it. Patients had a pretty limited lifespan. The hardest part was there was really nothing we could do about it," he said.

At the time, cancer treatment revolved around chemotherapy that frequently came with harsh side effects like nausea, vomiting, and hair loss. Druker said it wasn't working all that well, and he believed there had to be something better.

"Up until Gleevec, people had talked about it (targeting cancer cells without harming normal cells), but no one had ever done it," Druker said.

“That was the real revolution, you could actually do that instead of just thinking about it and imagining it, we made it possible.”

Druker, now the director of the Knight Cancer Institute at OHSU, began his research on CML at Harvard in the late 1980s and early 1990s.

His research was considered out of the mainstream, and skeptics at Harvard didn't think his approach would work.

"It was viewed as something that was kind of fringe. They said, 'there's really not room for you here, so why don't you go somewhere like Oregon,'" Druker said.

So, he did. Dr. Grover Bagby, the founding director of the OHSU Cancer Institute, welcomed Druker.

"He put his arms around me as the founding director of what was then the Oregon Cancer Center and said, 'Brian, I believe in you,'" Druker said.

Despite the obstacles, Druker persevered. He's not only a scientist, he’s also a doctor who sees patients. He said he did it for them.

"I set out to go into the laboratory to make a difference, to do something better, to bring advances out of the lab to benefit the patients I was taking care of," he said.

One of Druker's earliest patients was a six year old girl who was diagnosed with CML one month after the FDA approved Gleevec. Dr. Druker treated her with the drug and marvels at her success story.

"She ended up going to nursing school and was a nurse at Doernbecher Children's Hospital. And just last year, she delivered her first child," he said.

Most patients take the once a day pill for the rest of their lives, but a few are able to stop treatment. This patient was one of the few who've been able to stop therapy.

"To me, that's absolutely remarkable to watch this young child grow up, mature, and now start her own family and a new cycle," Druker said.

Inspired to give back

Rob Shick was so inspired by the gift of life Dr. Druker and Gleevec gave him, he’s become a fierce advocate in the quest to end cancer.

“It’s probably been the most fulfilling thing in my life these last 15 years. It is really a part of who I am now," said Shick. "Once you’ve been given your life back, you can’t give back enough."

“It was the most inspiring couple years of my life,” Shick said.

Ten thousand individual donors from across the world, including every state in the U.S., contributed to the challenge setting a new fundraising record.

“It catalyzed a movement. There was an editorial in the East Oregonian that said, 'Don’t we want Oregon to be known for ending cancer?'” Druker said. “We have made remarkable strides and advances.”

The next cancer revolution

Druker and his team are focused now on trying to bring the same type of precision oncology as Gleevec to more types of cancer.

“To think about how do we analyze cancer thoroughly, deeply, and learn as much as we can about each person’s cancer, and use that knowledge to target their cancer precisely,” Druker said.

They are also putting a lot of emphasis on early detection. The Knight Cancer Institute is working with a company that has developed a blood test that can detect different types of cancer at very early stages.

“And again, that’s something many people thought was impossible, and we are already seeing that possibility with a simple blood test. That would be yet another revolution we participated in,” he said.

The doctor-patient relationship between Druker and Shick has evolved into one where they are advocates partnering in the fight against cancer and good friends. They have spoken together at more than 150 events raising awareness and funds to invest in more research.

“When people meet him, they see that right away. This is someone who has saved the lives of hundreds of thousands of people around the world, and yet he remembers people’s names, he’s generous with his time,” Shick said.

Druker said one of the most important things he’s learned along the way is giving the gift of hope to people is the greatest gift you can give anyone, but he has also gotten back much more.

Credit: Rob Shick
Rob Shick walks his daughter down the aisle at her wedding, a milestone he wouldn't sure he'd make after his initial cancer diagnosis

Virtual celebration and ways to donate

OHSU is holding a virtual celebration to mark the 20th anniversary of the FDA's approval of Gleevec. Anyone interested can register here for the event. It begins at noon on Monday, May 10.

Those who would like to support cancer research at OHSU's Knight Cancer Institute can donate here.