The director of the Oregon Health Authority said Oregonians' sacrifices over the last six weeks probably cut COVID-19 infections down by 75%. 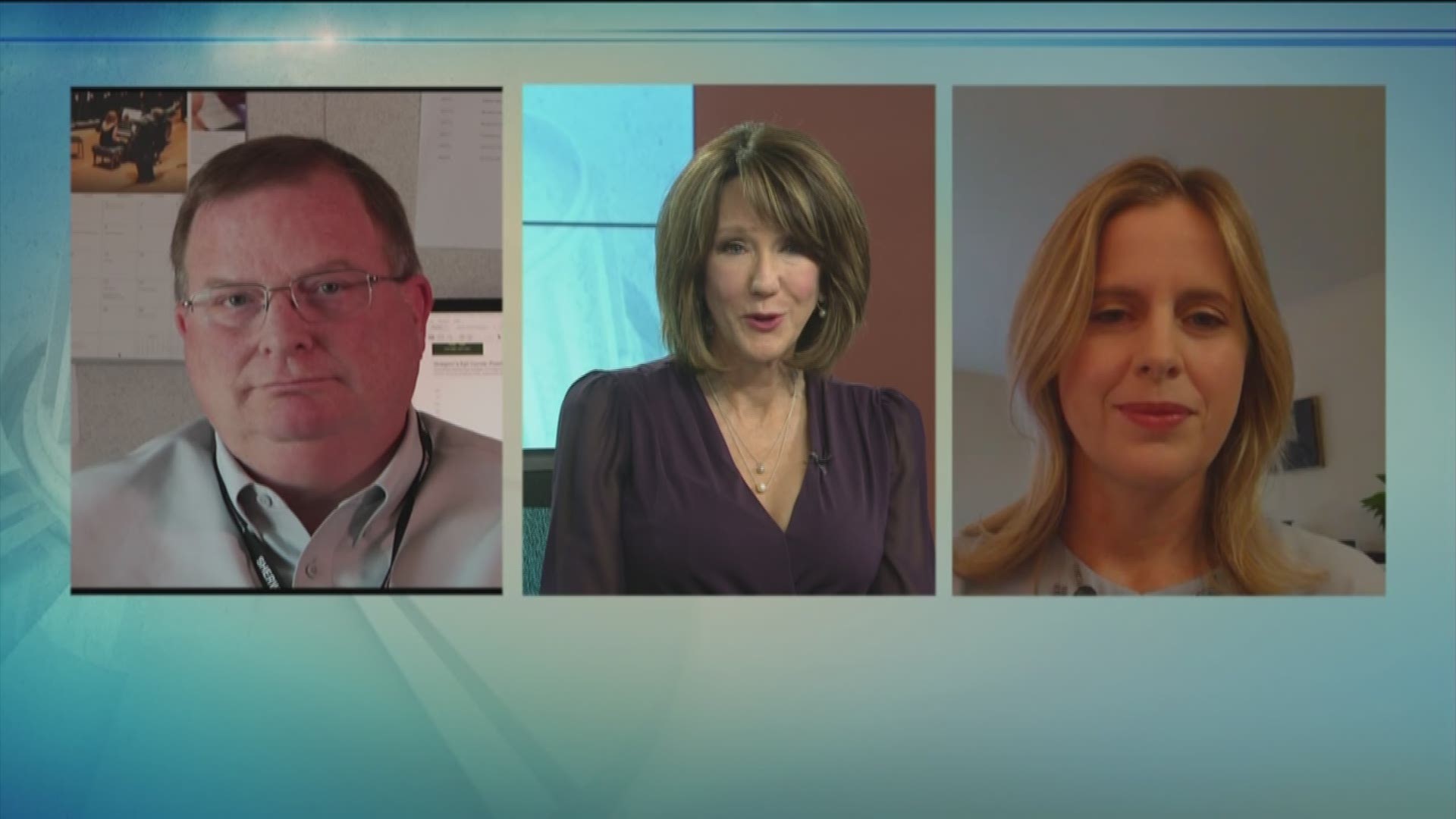 PORTLAND, Ore. — The leaders of the Oregon Health Authority and the Oregon Association of Hospitals are pleading with Oregonians to continue to stay home and social distance.

"It's beautiful out. I know it's tempting to go back to life the way it was before," said Pat Allen, the director of the Oregon Health Authority. "But we really need you to keep distancing. Keep making the sacrifices you're making."

Allen and Hultberg were guests on this week's "Straight Talk" program with host KGW's Laural Porter.

They praised Oregonians for the sacrifices they have made during the past six weeks, which Allen said probably cut the number of people with COVID-19 in Oregon by 75 percent.

This week, President Trump gave states a road-map for a gradual reopening of their economies, starting with a 14-day decline in documented coronavirus cases before easing restrictions.

RELATED: Gov. Brown: Process of opening Oregon should be cautious; state still in need of resources from feds

But Oregon isn't there yet. Six more deaths reported both Thursday and Friday, which is tied for the most reported in a single day. The statewide number of cases is now up to 1,785.

Allen said testing is important to stopping the spread of the virus, and the state is making progress toward having the number of tests needed

"Collectively, we've been testing about 9,000 people a week. We think we need to test about 15,000. We have promising testing technology available to us now," he said.

However, Allen said there are still some supply chain issues slowing things down. Tests are still limited, but Allen said someone with symptoms can ask their health care provider for a test.

The Oregon Heath Authority is also ramping up contact tracing. It's something the public health system has used before with diseases like measles. A public health worker calls the person with a potential case, finds out who they may have had contact with, and then calls those people, drawing a circle around potential cases.

"That actually makes that circle something that contains that case, and through quarantine, stops the spread of the disease," he said.

RELATED: What is contact tracing, and how will it work in Oregon?

A third thing the state is working on before loosening guidelines is getting an adequate supply of PPE for health care workers. It's something Becky Hultberg said has been a wrenching process for hospitals and caregivers.

"It has been really hard. It has been hard for caregivers who have been asked to change the way they use PPE. Their supplies have been restricted.
They don't feel safe," she said.

RELATED: Nurses push back on pressure to work without right equipment

Hultberg stressed getting an adequate supply of PPE is a critical step to getting things back to normal. Ironically, the progress Oregon has made in flattening the curve compared to other states has made getting PPE even harder.

"That kind of cuts a little bit against us," Allen said. "Because the priority is to get the PPE to the hot spots in the country. So, it's hard for us to get adequate supplies right now," he said.

Another irony is the impact the pandemic and social distancing guidelines have had on the state's hospitals. Becky Hultberg and the Oregon Association of Hospitals and Health Systems called for a "shelter in place" order days before Gov. Brown issued her "Stay Home, Save Lives" order. Hultberg said they still support it. (Story continues below)

However, part of the guidelines abruptly ended all elective surgeries and procedures to save critical PPE. That has resulted in huge financial losses for the state's hospitals and health systems.

"It's kind of counter-intuitive," said Hultberg. "You'd think with a pandemic hospitals would be full and revenue would be great. But it's not. Really the opposite has occurred," she said.

Hultberg said hospital revenues have also taken a hit because people are afraid to go the hospital for fear of getting the virus. She said visit to clinics and emergency departments are also way down.

"When you take those two factors together hospital revenues are down 40%, and in some cases 70%," Hultberg said.

It's been especially hard for hospitals in rural areas that have few, if any cases of coronavirus.

Hultberg said it's caused hospitals to make tough decisions around staffing, and some, she said, are weeks away from dire financial circumstances.

Gov. Brown has indicated some of the first restrictions lifted could be for elective procedures and surgeries. Hultberg said a task force of association CEOs and operational staff are looking at the issue, and preparing recommendations for the governor on how to safely restart elective procedures.

"They have to be thoughtful recommendations based on the best science we have because we want to make sure patients and caregivers are safe before we restart the procedures," she said.

The hospital association has asked Gov. Brown and the Legislature for help to stabilize the state's hospitals that are struggling financially because of the pandemic. They're asking for $200 million. Hultberg said they haven't heard directly from the governor about their request, but they'll keep trying to get the message out that hospitals need the aid.

"This is fundamentally a public health problem. If we are going to restart the economy, we have to have a strong infrastructure that is able to response to any COVID outbreaks," she said.

Allen said they will also be looking at restarting the economy from a geographic perspective. He said certain parts of the state may be able to reopen sooner than others, and they'll watch the results carefully.

"We may see a flare up in a particular area that causes us to make changes in the other direction," he said.

RELATED: Should stay-at-home restrictions be lifted for rural Oregon

However, he said the goal is that any closure could be narrower, because the state would have adequate testing to isolate cases.

Researchers at Harvard School of Public Health have said without a vaccine, Americans might have to endure social distancing measures to deal with the coronavirus outbreak until 2022.

"I don't think it's tenable to do exactly what we've been doing for that long," Allen said.

"I think in a period of time when we start to see cases decrease, when we know we have ample hospital capacity, which I think we do now, when we are able to deploy testing and contact tracing, I think we'll be able to make changes and gradually reopen things that have been shut down," he said.

Allen said he believes that will be in weeks, not months. In the meantime, Hultberg and Allen emphasize the need for Oregonians to hold the line and stay home.

"You're doing the things we need to do in order to get back to normal, and hopefully all of us can enjoy what we hope will be a beautiful Oregon summer," Hultberg said.