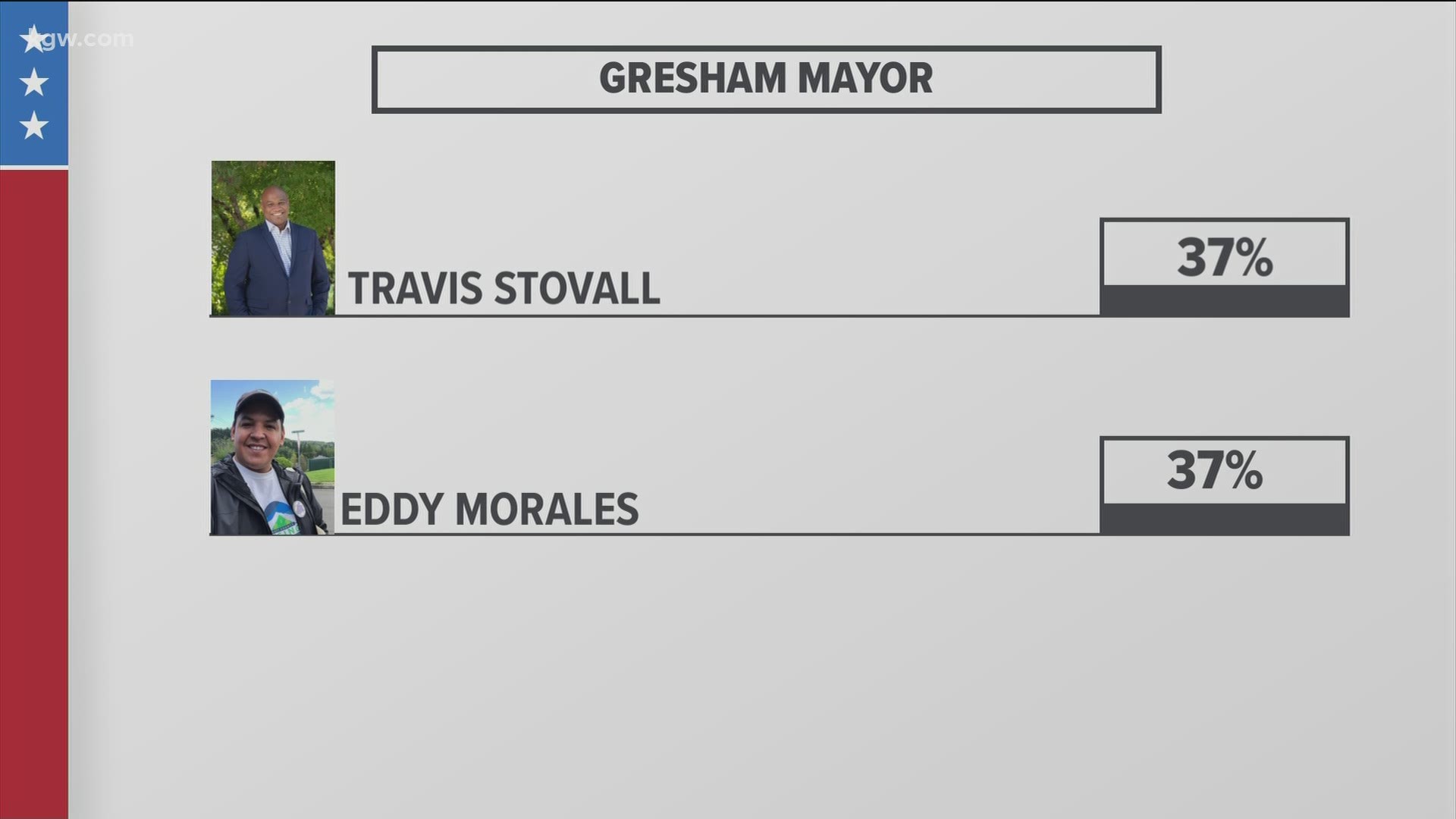 GRESHAM, Ore. — More than 10 days after the 2020 election, the race for Gresham mayor has still not been called and it looks to be a photo finish.

As of Friday night, Nov. 13, just 60 votes separated the candidates, Travis Stovall and Eddy Morales, the top two vote-getters in a five-person race.

The race has been narrowing daily. On the day after the election, Stovall led by 121 votes. The 60-vote difference is under the 0.2% margin that would trigger an automatic recount.

Both Stovall and Morales were guests on “Straight Talk” this week.

Their campaigns are working tirelessly to contact the 558 voters with so-called "challenge ballots." Those are ballots that either have signatures that don't match their voter registration on file with the county, or there was no signature at all on the return ballot envelope.

The county has notified those voters and they have until 5 p.m. Tuesday, Nov. 17, to fill out and return the document for their vote to count.

Chasing those challenge votes isn't new to Eddy Morales, a current Gresham City Councilor, who narrowly won his election in 2018.

He ended up winning that race, beating the incumbent Kirk French by 58 votes after an official recount.

"On election night [2018], I was down about 1,500 votes and by this time in the last election, I had caught up and went into this phase, curing ballots," he said. "We want to make sure all voters in Gresham, and our supporters' ballots are counted, so we are reaching out to make sure they know to get their ballot to the county offices by Tuesday."

"We are doing the same thing," said Stovall. "We are reaching out to the voters on the list of challenge ballots to make sure they know exactly how to get them back," he said.

It's likely there won't be a winner declared until Nov. 23, when the vote is certified.

Both Morales and Stovall call the 2020 election in Gresham historic. Not only was there record voter engagement, but the mayoral election will represent a new era for Gresham, the state's fourth-largest city.

Both Stovall and Morales are men of color. Stovall is an African American entrepreneur and Morales is a gay Latino community organizer. The election represents a transformation of the once mainly all-white agricultural community to a more diverse cosmopolitan suburb.

"Our city has changed so much in the last decade. We are 40% Black, Indigenous, and people of color here," Morales said. "Almost 20% of our population are not U.S. born. And our city is younger. The average age is 35."

Morales said whoever wins the mayoral election will be more representative of what Gresham looks like today.

Stovall said the shift is not just about the demographics of Gresham, but also the movement across America to be more inclusive and to make sure more people of color have a voice in leadership positions.

"And that's what I believe this election is about," he said. "With the front-runners being minorities, we now have an opportunity to have a platform to effectively talk about inclusivity and the racial justice that needs to happen."

Stovall would be first Black mayor of Gresham

If Stovall's lead holds, he would be the first Black mayor in Gresham, and of any large town or city in the Portland metro region. Stovall said the opportunity would be an honor.

Morales is already a Gresham city councilor. So, no matter how the race goes, whether he becomes mayor or remains a city councilor, he will continue to have a seat at the table at city hall. He said his mission has always been to bring more diversity to the council and to bring in more voices.

"Regardless of what happens with this election, there will be four of us on council who share similar values about engaging the community, being transparent, being inclusive," Morales said.

Morales said one of the first things the new mayor will have to deal with is the budget shortfall of over $13 million. However, he cautioned against filling the hole in ways that will hurt the city's most vulnerable.

"We want to make sure we have a sustainable budget going forward," Morales said. "We also want to make sure we come out of this COVID pandemic making sure we don't leave our most vulnerable behind. And we don't balance our city budget with regressive fees, the way it's been done, on the backs of people who have little already."

When asked about how he would address the budget shortfall, Stovall said while he's not entirely supportive of the city's utility fee, calling it regressive, he said the city needs to look at how to use it effectively. He also said city council should examine short-and long-term investments, as well as budget cuts.

"There are going to be budget cuts," he said. "We just have to make sure critical services we need to provide in the city are there and available."

Morales said the people of Gresham should be proud. He said there were contested elections for every position in Gresham, which he said had never happened before.

"It signals to me there are more people paying attention in our city," Morales said. "More people wanting to be involved. That's been my mission since I first ran that we put the power back into the community. That people who are directly impacted by decisions we're making on the council are included in the solutions."

He called it an exciting time for the city and believes the state's fourth-largest city, and biggest suburb in Portland, has a big role to play, not only in the region, but also statewide.

Stovall agreed the number of people who were engaged in the process led to a historic election, and pledged to continue to connect with citizens.

"We've got to make sure we reach out to citizens, engage them in the process, and make sure we're listening as we move this city forward," he said.

Stovall, who has been embraced by the business community, also said one of his priorities is equitable economic development.

"Economic development in itself is not bad, but it needs to be equitably distributed," he said. "How do we make sure everybody has an opportunity to pull themselves up from poverty to achieve prosperity?"

He said he's seen great progress in Gresham over the last 15 years and wants to keep it going.

"It's a great foundation. We need to keep that going," Stovall said.