Members of the Street Response Team discussed how the pilot program is going and its future on this week's episode of "Straight Talk with Laural Porter." 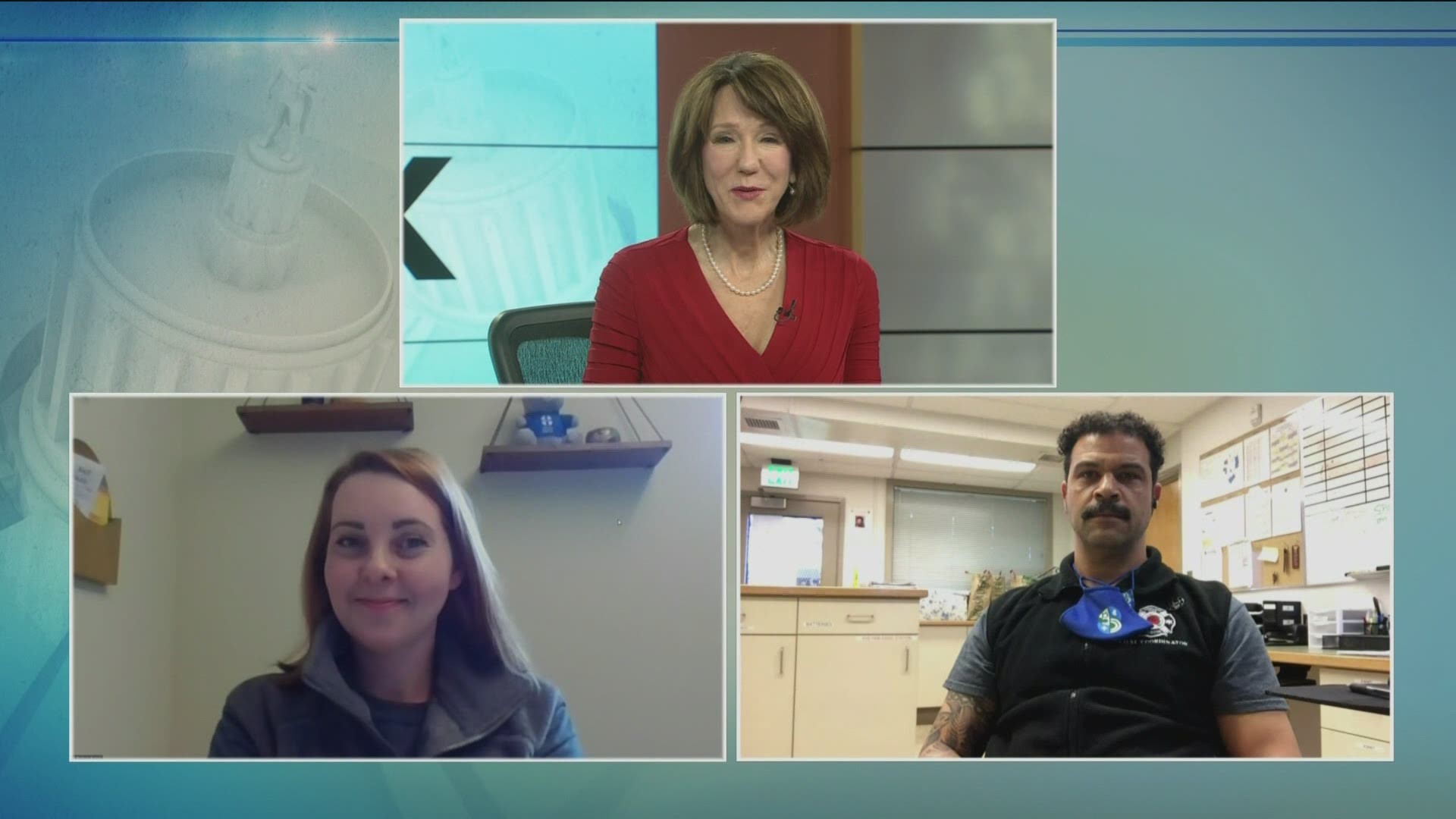 PORTLAND, Ore. — Portland Street Response Team paramedic Tremaine Clayton was on one of the most difficult calls yet in the team's first month operating in the Lents neighborhood. He and team member, Britt Urban, a mental health clinician, weren't sure they were going to be able to help their client, but then, finally, there was a connection.

Clayton called the moment a "glimmer" when you realize hope is possible.

"I kid you not, a rainbow came out," Clayton said. "So, we said, you know what, that's the glimmer. It was the best possible outcome we could have had. The rainbow was shining. That's the hope we are talking about."

Clayton said the person they had come to help eventually understood they were there to support them and not just to run them through the system. He felt they made a difference that day. And that's the ultimate goal of the new Portland Street Response Team, which offers a non-police response to assist people in a behavioral or mental health crisis, or experiencing homelessness.

After a review of the Portland Police Bureau, the city auditor's office confirmed a report from The Oregonian that found about half of the arrests made in 2017 and 2018 were of people who were homeless. Portland Street Response is designed to offer an alternative.

Clayton and Portland Street Response Team program manager Robyn Burek discussed how the pilot program is going so far and its future in this week's episode of "Straight Talk."

After months of delays because of the pandemic, the team began taking calls on Feb. 16. Burek and Clayton had been working together on the program since 2019. Burek called getting the Portland Street Response Team underway deeply emotional and gratifying.

"There are not a lot of things we work on in our lives where you see the culmination of things and get to experience it in the moment. So, it has been great," she said.

Portland Commissioner Jo Ann Hardesty has led the way on the team's development. She said she was giddy about the launch and can't wait to get information back from the pilot year of the program.

"We are going to learn everything we can with this pilot so we can roll it out citywide, and we are being informed by what is happening on the ground," Hardesty said.

In its pilot year, the Portland Street Response Team is operating only in the Lents neighborhood, which includes roughly five square miles from Southeast 72nd to Southeast 111th and from Clatsop up to parts of Powell and Division.

The team chose Lents because of its cultural diversity. Burek said 150 languages are spoken in the neighborhood. It also has a growing homeless population and is an under-served community.

Another reason Lents was chosen for the pilot is the volume of calls from the area to 911. It's been outpacing the growth of calls across the rest of the city.

"The need was there. All the pieces were in place. It just seemed like the perfect spot for us to run this pilot," Burek said.

Commissioner Hardesty said the team spent a lot of time in the Lents neighborhood preparing to launch its first unit. Team members met with neighbors, businesses and neighborhood associations to explain the work they would be doing on the ground.

She said those meetings were key. The Lents community welcomed them and asked, "What do you need?" Hardesty thanked them for their support.

"I want to give a big shoutout to the Lents community who embraced this project with open arms and are true community partners with us," Hardesty said. "They want this program to succeed as much as I do, and I want to make sure those neighbors understand how much I appreciate their support."

How to call the Portland Street Response Team

For now, Portland Street Response is only taking calls in Lents. People needing help or calling for someone else in need of assistance can call 911 or the non-emergency number at 503-823-3333.

Dispatchers are trained to triage calls and will ask a series of questions to determine the appropriate response, whether to send an officer or Portland Street Response.

"They are very excited to send us. If you call them, they will definitely be triaging," Burek said.

Many of the calls referred to the Portland Street Response team involve people who are homeless. Burek pointed out that homelessness disproportionately impacts Black, Indigenous, and people of color. According to a 2019 count by Transition Projects, she said, they make up 38.1% of the homeless population.

And they tend to fall into two systems; the jail system and the emergency department, both of which have long-term ramifications.

RELATED: How does Portland's Street Response Team compare with a similar program in Denver?

According to Commissioner Hardesty, one of the biggest issues the team faces right now is having enough places to take people in crisis that aren't jails or emergency rooms.

"We don't have enough mental health service providers to serve the needs of people on the street or in the community," Hardesty said.

"And we don't have enough culturally competent or culturally-specific providers to meet the extraordinary need that we have," she said.

Hardesty is hopeful the program will get significant resources from the passage of Oregon ballot Measure 110, which decriminalized drug possession and established a drug treatment program funded in part by cannabis taxes.

"That would help a lot. We also need the state to be a partner in investing in mental health treatments in our community," Hardesty said.

Other sources of funding

The Portland Street Response Team is going to need more sources of funding to achieve its goal of expanding citywide. One source of funding could come from Congress.

Robyn Burek said they're also hopeful the Oregon Legislature will approve a $10 million grant to be distributed across the state for programs like Portland Street Response.

Portland Street Response currently has one team that answers calls Monday through Friday from 10 a.m. to 6 p.m. However, Burek said they hope to add an additional team in July or August that would take calls from 4 p.m. to midnight and cover some weekend shifts.

"We won't have 24-7 coverage in Lents, but we will try to get as close to that as possible with our second team," she said.

The ultimate goal is to expand the program throughout the city of Portland.

"Here's what I know for sure. Portlanders want Portland Street Response in every neighborhood in our community, and it's my job to figure out how to get it on the fast track in a way that keeps the integrity of the program intact," Commissioner Hardesty said.

In February of 2022, Portland Street Response team members will go before the Portland City Council to report their findings on the pilot program. In addition, Portland State University is doing its own independent evaluation and will also report its findings to the council.

Burek said she's hopeful the council will agree to fully fund Portland Street Response to expand across the city.

"We will use this pilot year to collect the data and really understand what the scale of that might look like," Burek said.

As the team looks at expansion, Hardesty says it is important to her team members are paid a living wage.

"The people we hired reflect the community they serve in the Lents neighborhood. They are multi-lingual, and they are paid a living wage," Hardesty said.

Many people who work in the mental health industry make low wages and Hardesty said they can burn out. Burek, who has a Master’s degree in counseling, agreed with Hardesty.

Not a lot has changed since then. Burek said CAHOOTS in Eugene typically pays its workers between $15 and $18 an hour.

"It's really important we set the bar in Portland and say we value the work these individuals are doing and this industry has to offer," she said.

Hardesty said it's important to her in building the Portland Street Response program to do it right, not fast.

"I am intent on hiring people who can provide empathy and empathetic responses to people on the street, and those people shouldn't have to worry about where they'll sleep or whether or not they can pay their light bill or whether they can afford gas to get home," Hardesty said.

Burek said they get calls all the time from people who want to know how to help and if they can volunteer with Portland Street Response. She said they are amazed at the generosity of so many people reaching out. But, she asked potential volunteers to wait while the team works with the city's new community engagement coordinator to figure out what volunteerism should look like with Portland Street Response.

"Honestly, it makes you realize you are not in this alone. There is a whole community of Portlanders who really want to make a difference," Burek said.

The team's paramedic, Tremaine Clayton, added you don't have to be on their team in order to help.

"Just by being a compassionate person," Clayton said. "You can do that on your own. Safety is a concern, of course, but a lot of these people just need hope and help. They don't want to be hurting anybody."

Burek summed up how she and the team are feeling after a month on the job working with people who need help in the Lents neighborhood.

"The ability to go out and make an impact and be accepted and received the way we have is really gratifying," she said.