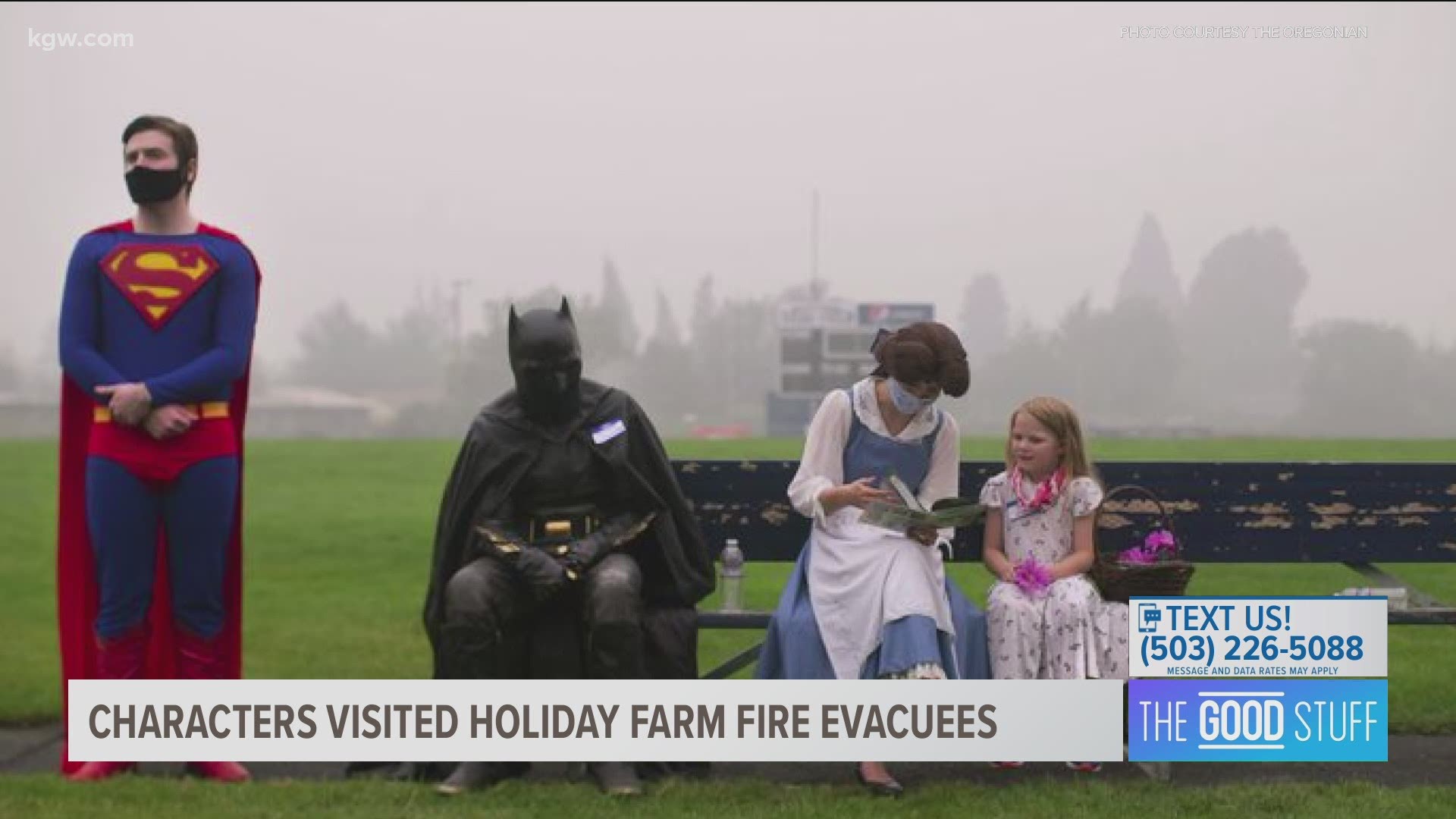 SPRINGFIELD, Ore. — At Springfield High School, the smoke from the Holiday Farm Fire filled the air early in September. The Oregonian's veteran photojournalist Beth Nakamura had just arrived to the high school to take some pictures and document what she saw at the evacuation site.

She said within five minutes of her arriving, a man walked up and urgently told her to follow him. He had to show her something.

"I could tell he was really on a mission with me," Nakamura said. "I'm very happy to comply if someone's going to hand me a story."

She followed him back behind the high school to the football field and in the field were Batman, Superman and Belle from Beauty and the Beast.

"I immediately knew I was in the middle of something special," Nakamura said.

Dressed as Belle was Lexi Longstreet, 21, of Junction City, Oregon.

"I was literally sitting on my couch with my roommate at my house. We were watching the news and scrolling through all of this stuff and we couldn't believe how sad it all was," Longstreet said.

She found out about the Springfield evacuation site and wanted to help, but knew she would need help. She called twins Dylan and Tanner Alexander, aka Superman and Batman, respectively. All three work for Longstreet's "Enchanted Parties Company", a character-themed entertainment company where characters entertain at venues and parties.

This time it was a different scenario.

"It's not their birthdays, they're going through awful stuff. It's such a different environment," Longstreet said, "It's so hard and strange to interact with these children and try and give them hope and encouragement."

Longstreet said when they first arrived, everyone was excited to see them.

"A lot of them were like, 'That's Batman and Superman!' They ran up and started hugging us," Longstreet said.

Dylan Alexander, who dressed as Superman, said, "They were in such a bad place there, some of them had lost their homes. Their families had lost their homes. For them to see a character like that, it takes them out of reality and kind of makes them forget what they're going through at the moment and they can sit and talk or just to say hi, will hopefully make their day."

Alexander knows the impact a superhero like Superman can have on a little child.

"He's kind of made me who I am today. I didn't really have the best father figure in my life, so I kind looked for father figures in other things and he kind of taught me what the right thing to do is," Alexander said.

Longstreet recalls one girl, who she said her mom was a volunteer, coming up to her and wanted to say hi.

"We just sat and read a story together and she was so sweet. She was telling me about her dress and it had pink pandas on it and so we decided that she was Queen of the Pandas," Longstreet said.

The hours that trio of characters stayed at the high school wouldn't be more than a fading memory, had it not been for Nakamura's photos.

Amid staggering catastrophe, people are everywhere helping people. At a Holiday Farm fire evacuation site, a few dressed up as characters to comfort & entertain children. I’m writing it up, here’s a peek👇#OregonFires pic.twitter.com/19RL81iFkS

The Oregonian wrote and published Nakamura's story in the days following.

The photos are a constant reminder of the good that is still in the world. A reminder of the people that want to help others amidst a chaotic and devastating time in their lives and that not all heroes wear capes, some wear dresses too.

"We were all working together to keep these kids distracted and entertained," Longstreet said. "It's an emotional thing for sure."

Longstreet said since the surprise appearance at Springfield High School and after word had spread, donations have been arriving and volunteers asking what they can do to help.