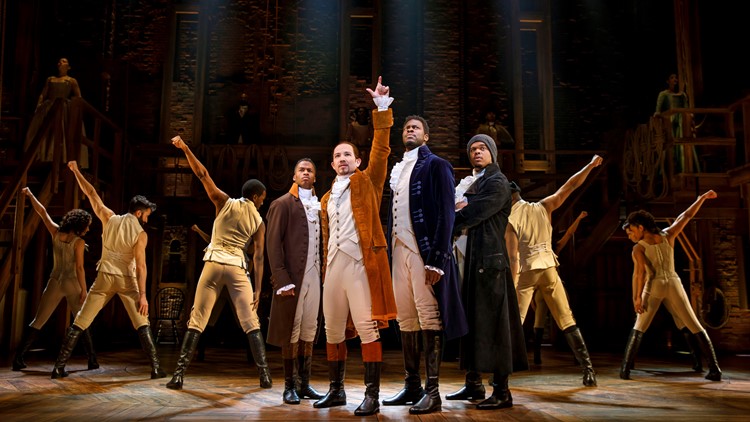 Photo by: Broadway in Portland
Hamilton

'Hamilton' returning to Portland as part of 2020-21 Broadway lineup

PORTLAND, Ore. — Broadway in Portland on Wednesday announced its lineup for the 2020-21 season, which includes the return of Hamilton.

The Broadway hit, which blends hip-hop, jazz and R&B to tell the story of the American founding father Alexander Hamilton, was last in Portland in 2018 and the shows quickly sold out, leaving many customers frustrated. Those who missed out two years ago will now get another opportunity. The show runs from March 16 to April 11, 2021.

In addition to Hamilton, six other musicals were announced as part of next season’s lineup.

Here are the rest of the shows that are part of next season's lineup:

The Band’s Visit
Broadway in Portland

The new season kicks off with The Band’s Visit, which won 10 Tony Awards in 2018 including Best Musical. The show is about a band that brings new life to a town that’s off the beaten path.

The classic musical will be back with new choreography for a new generation of Cats fans.

Ain’t Too Proud – The Life and Times of The Temptations

The 2019 musical was nominated for 12 Tony Awards. The show follows The Temptations’ journey from the streets of Detroit to the Rock & Roll Hall of Fame and includes performances of some of the group’s most beloved hits including “My Girl” and “Papa Was a Rolling Stone.”

In celebration of the 50th anniversary of Andrew Lloyd Webber’s iconic rock opera, a revived production of the musical is making a stop in Portland next year.

The musical made its debut on Broadway in 2018 and was nominated for two Tony Awards. The show takes you through the barriers Donna Summer had to break through to become the icon we know her as today. The score features more than 20 of Summer’s hits including “Love to You Baby” and “Bad Girls.”

The season ends with Pretty Woman: The Musical, based off the 1990 romantic comedy film. And yes, included in the score is Roy Orbison’s “Oh, Pretty Woman.”

RELATED: First trailer for Lin-Manuel Miranda's 'In the Heights' movie has arrived