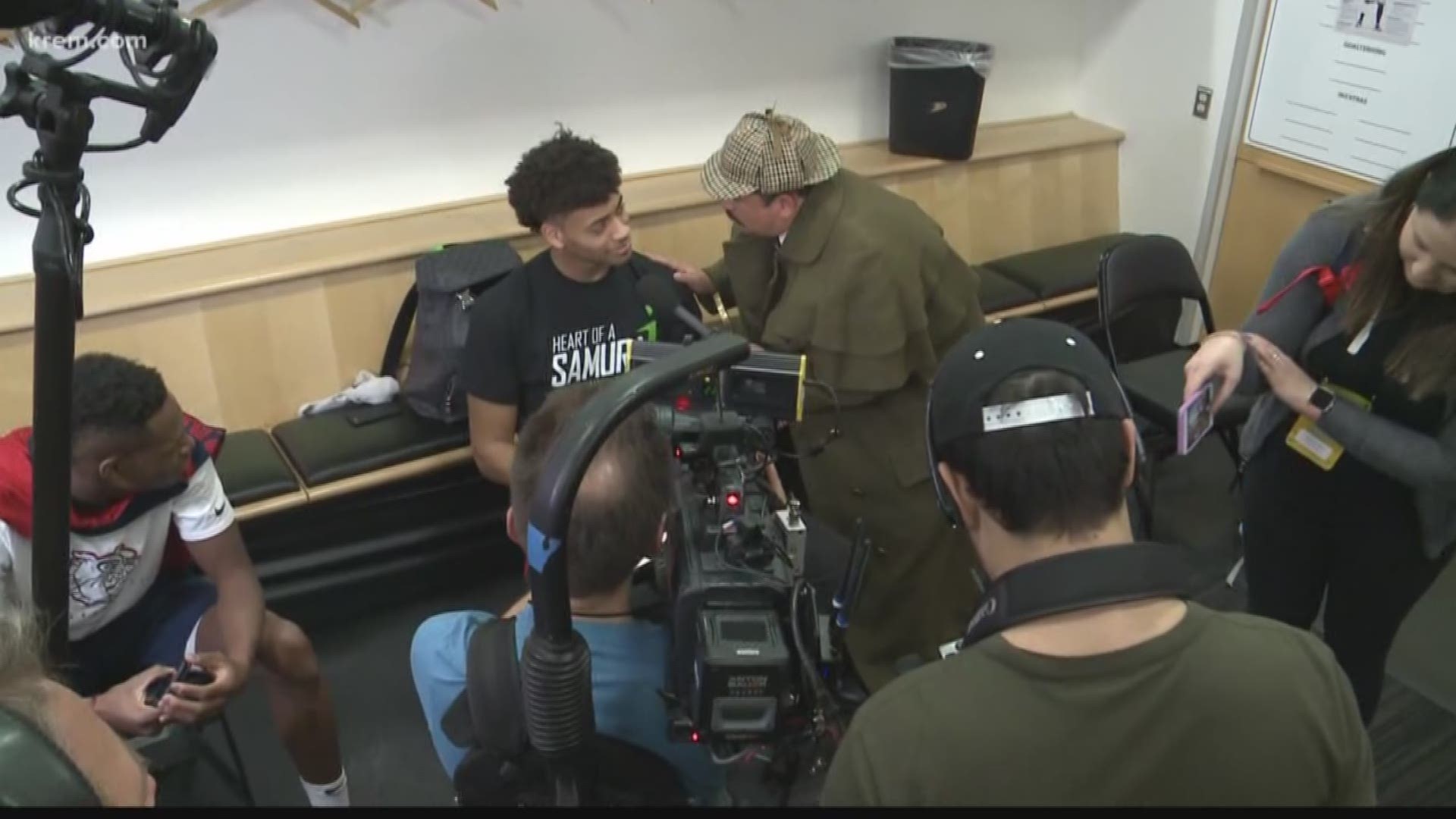 Rodriguez wore Sherlock Holmes-style garb when he spoke with the guys to prove whether or not Gonzaga University exists. This comes after the show's host Jimmy Kimmel said the school is a hoax.

"This entire locker room is buzzing," Greene tweeted. "I’ve never seen media members gather around another media member do an interview. Here we are."

Greene caught up with Rodriguez after he spoke with some of the players.

Greene asked him if he had any results into his Gonzaga investigation.

Rodriguez said the Gonzaga players’ arguments convinced him that Gonzaga “might” be real.

"One of them told me Gonzaga has been there more than 100 years. I don't know if it's true or not, but it sounds like it might be true," Rodriguez said.

He did wish Gonzaga luck on their game on Thursday.

"I hope they win and can play on Saturday," he said. "Gonzaga!"

Guillermo wants the team to be on the show if they win the national championship to prove to everyone that Gonzaga exists. 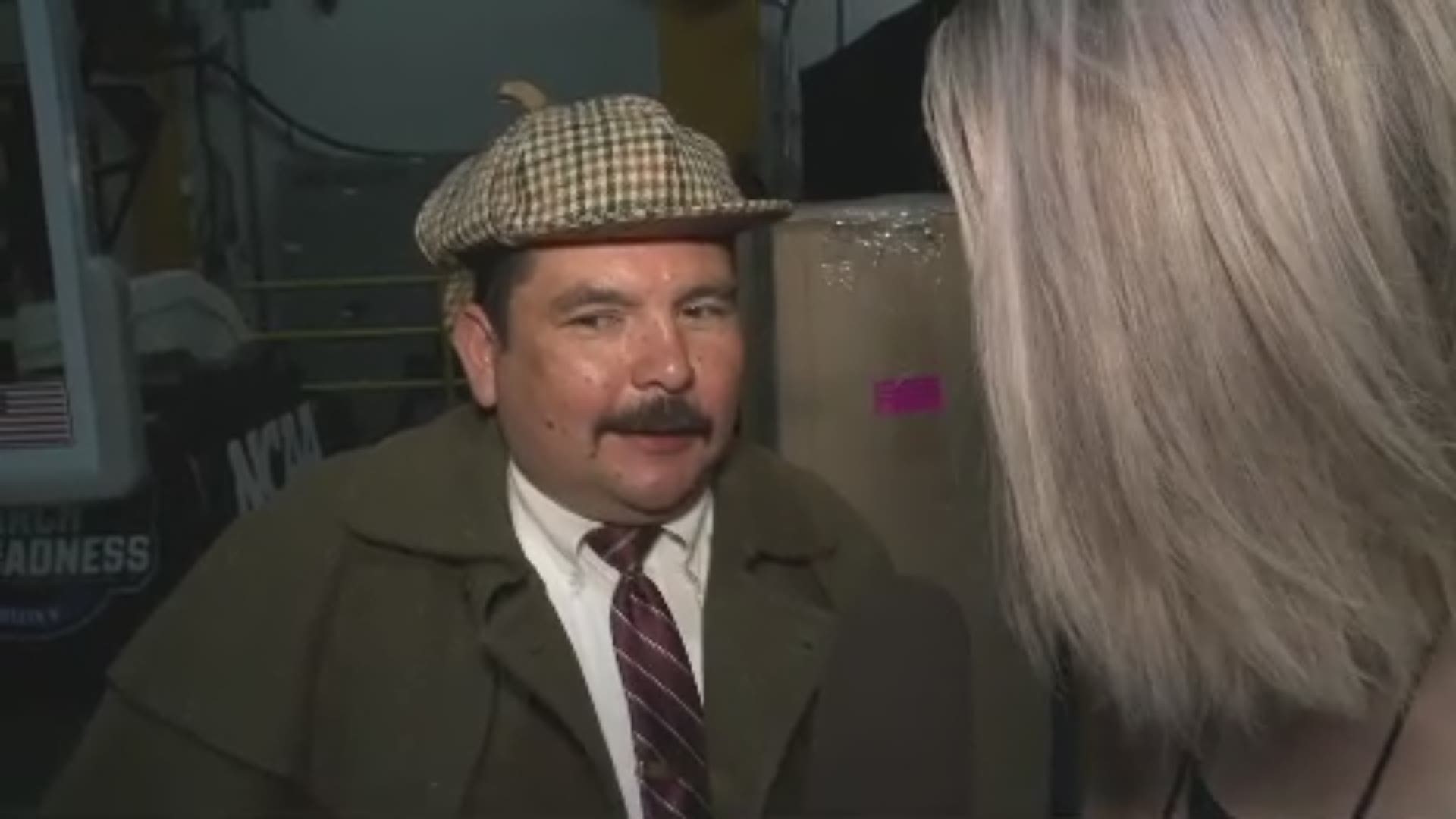 Gonzaga mascot Spike the Bulldog also joined in on Kimmel’s crusade to prove Gonzaga University is an elaborate hoax. Sort of.

“Gonzaga, if you don’t know, is a made-up university. I have seen no proof that it exists,” Kimmel said during his opening monologue on Tuesday night.

“They sell shirts that say Jurassic Park, too. It doesn’t mean dinosaurs exist,” he joked.

When Spike the Bulldog eventually appeared on the set of Jimmy Kimmel Live!, the talk show host described him as the “generic Bulldog mascot every other college in the United States has.”

Spike’s mission: he was sent by Gonzaga to kill Kimmel.

“But I’m not going to because you’re the only one speaking the truth!” the phony mascot exclaimed. “Gonzaga is fake. I’m the realest thing about this school. And I’m a guy dressed like a dog.”

The faux Spike said he asked the question of whether Gonzaga exists twenty years ago before the school shot him with a tranquilizer dart and sewed him into the mascot suit.

“And the basketball players. They’re not human! They’re lizard people being controlled by the Illuminati,” the man in the mascot suit said.

Even Kimmel admitted that statement was a bit far-fetched.

“It’s all a lie! It’s all a lie!” the man in the suit shouted as he was eventually dragged off the show’s set by men in black suits.

Kimmel’s solution: his partner Guillermo needs to go to Anaheim during the Zags’ Sweet 16 game to get to the bottom of this situation.

Watch the full video below:

"I have a theory, and I know this might be controversial, but here it is," Kimmel said. "I don't believe Gonzaga exists."

The comedian went on to joke about the Bulldogs bringing attention to the school.

RELATED: 'I don't believe Gonzaga exists': Jimmy Kimmel jokes about the Bulldogs on his show

This claim prompted many responses from alumni and Spokane residents alike, as well as some backlash. The City of Spokane and the Gonzaga men’s basketball team even chimed in.

On Wednesday night, Kimmel reaffirmed his belief that Gonzaga is a mythical place and highlighted responses to his monologue from local media outlets, including KREM 2.

“I think it’s very possible that Gonzaga is a hoax, probably cooked up by the Canadians to screw up our basketball brackets, and that made some people mad," Kimmel said.

Kimmel also joked about someone from Gonzaga driving him to the middle of a field and leaving him there if he were to visit Spokane. He also said that he would later wake up in a bathtub with three missing kidneys.

He wrote, “Hey Jimmy Kimmel! We PROMISE not to touch your third kidney. I’ll bring some concrete evidence to LA with me. Thanks for picking the @ZagMBB to win it all!”

All of the commotion also resulted in a petition to have Kimmel give the commencement speech at May graduation. Senior Jacob Schmidt and his roommates think it's a way to garner attention from the comedian.

"It started out a little bit as a joke, but we do think we can get a lot of signatures," Schmidt said.

On Wednesday, Gonzaga asked people via Twitter to send photos and videos to Kimmel using #GonzagaExists. Now, a Spokane Valley company has made apparel with the hashtag to convince Kimmel that Gonzaga, again, is real.

Regardless, Kimmel said he filled out his bracket and has picked the Zags to win the national championship.

RELATED: The biggest upset might be the 'feud' between Jimmy Kimmel and Gonzaga 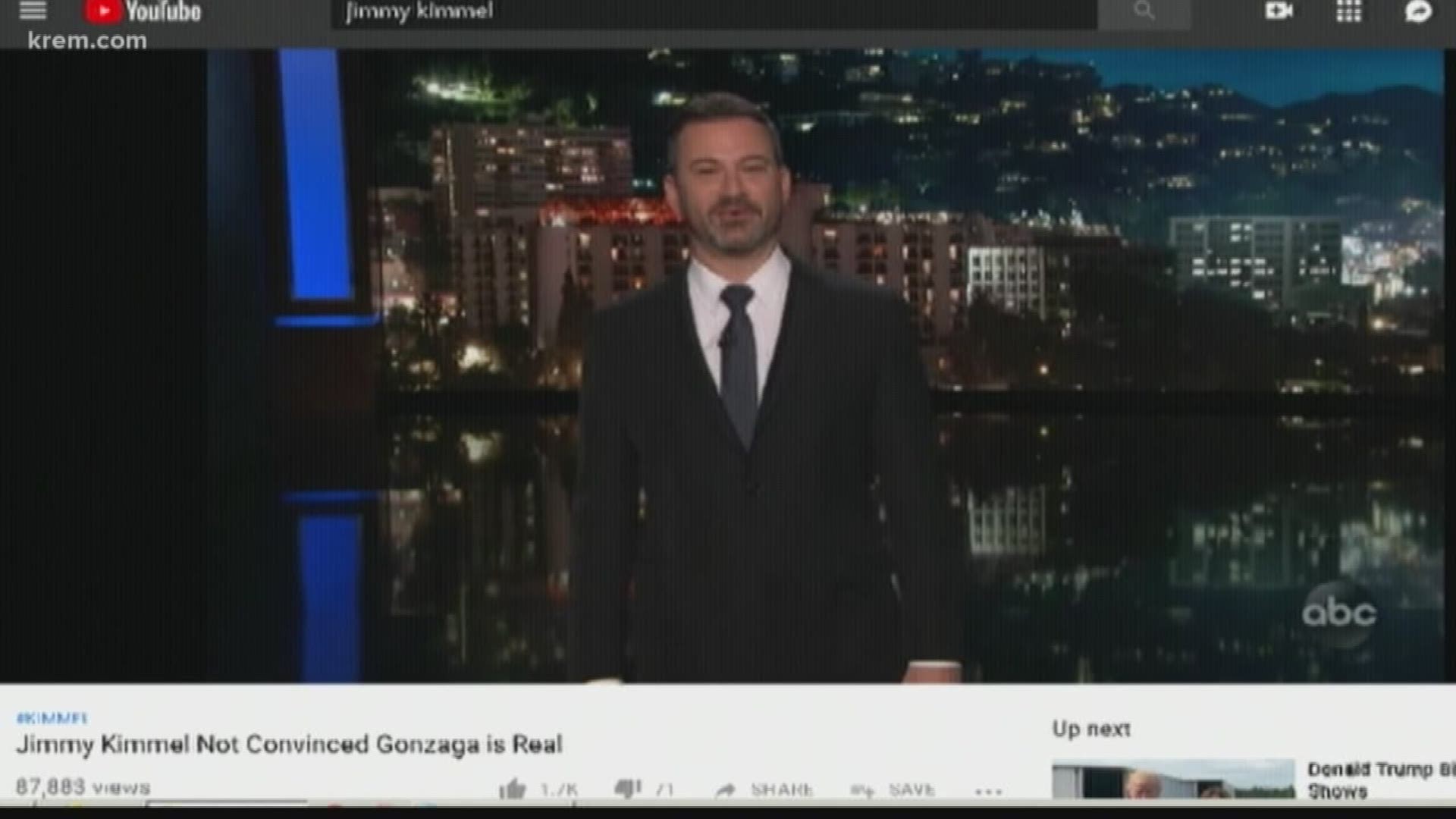