REVIEW: The problem with the 'Joker' movie

I'll give "Joker" this: I couldn't stop telling people about how annoyed I was at this movie, so it at least had me talking. 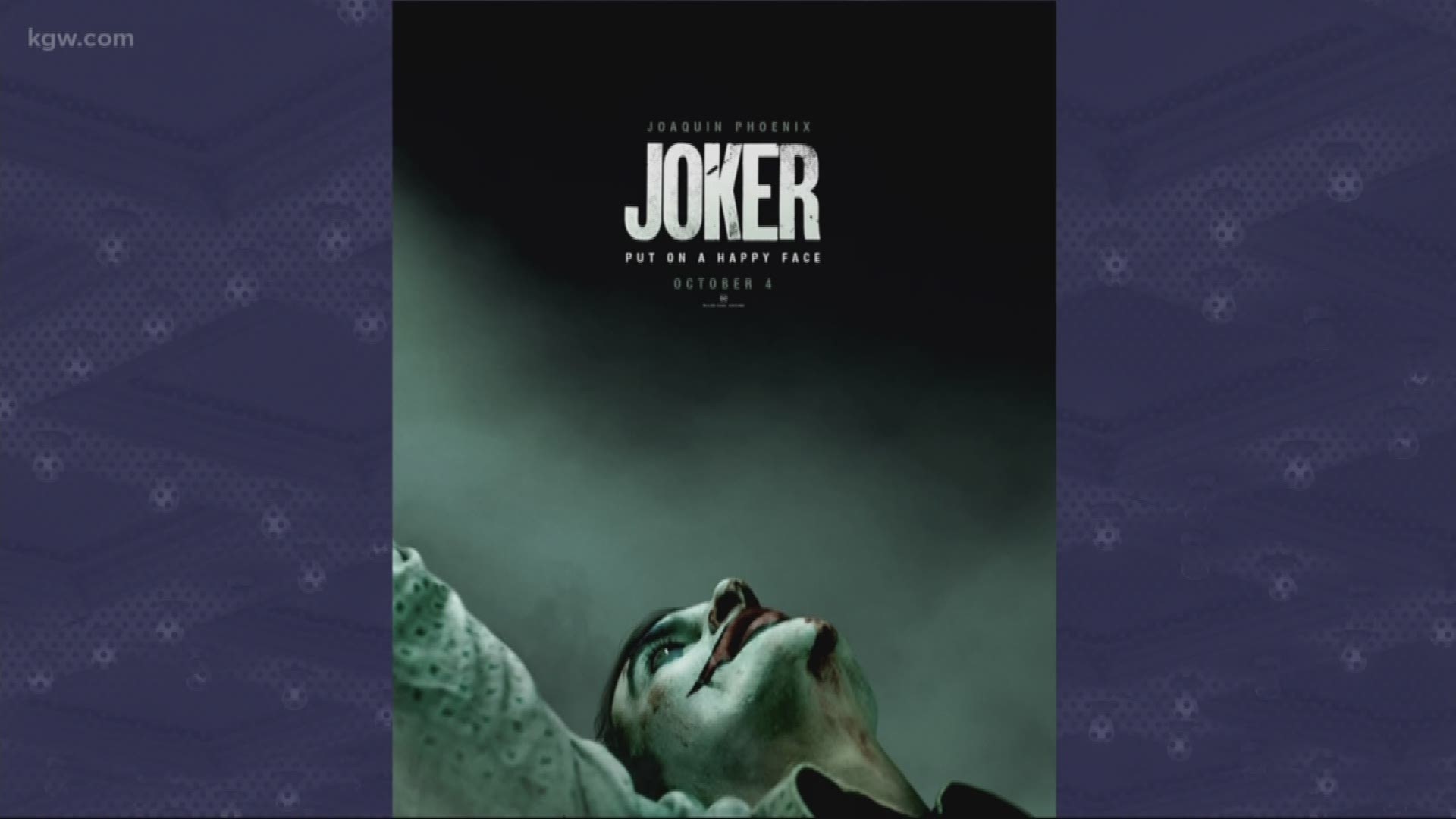 This is Spoiler City, so be warned.

“Joker,” directed by Todd Phillips (of so-called ‘bro comedy’ fame including “The Hangover,” “Old School,” “Due Date” etc.) and starring the world’s second-favorite dark boy after Jake Gyllenhaal, Joaquin Phoenix, was the least rewarding, most egregious, male temper tantrum I have ever had the displeasure of sitting through.

I feel concussed from the heavy-handedness in this movie.

Arthur Fleck’s (Phoenix) first words to his psychiatrist are to question whether things are getting "crazier out there." OOF.

Between the really obvious and clunky dialogue of the soft-spoken Fleck, the mood lighting which showed off just how much weight Phoenix had lost for the role, and the shots where he was framed right in the center while he looks off into the distance, I found this movie to be beautiful, but predictable, from a visual standpoint.

There were like three too many drone shots of a city, to be honest.

And I know I already mentioned it but they REALLY wanted you to notice how gaunt Phoenix looked as Fleck. He spent so much time with his shirt off writhing about on screen for no reason, other than to highlight Fleck's mental illness, that you could only worry for Phoenix's health.

This movie was set in the dark ages of Gotham, AKA the late '70s, early '80s, when it was overrun with crime.

RELATED: A 10-second recap for every Marvel movie before Avengers: Endgame

Arthur Fleck is a down-on-his-luck guy with a backstory of abuse and mental illness who can’t catch a break. He has delusions of grandeur in his life and is deeply depressed.

You can see this because he holds a gun to his own head no less than four times in this movie, which felt a lot like the director standing at the foot of the theater and screaming at the audience, "HEY, HE'S DEPRESSED!"

Fleck is an aspiring comic. It really felt this movie was set in the 70s-80s for the express purpose of being able to tell off-color jokes, usually about sex and/or demeaning women, and it wouldn’t be seen as uncouth.

It felt like a giant two-hour temper tantrum by Phillips who blamed, in an interview, the far left for the backlash his movie received, despite numerous police agencies across the country being put on alert for fear of actual violence during the movie’s premiere.

But back to Arthur:

Of course, he has mommy issues because what male-character-turned-psychopath doesn’t?

And of course, he stalks and lusts after his attractive neighbor who I was shocked to find had a name in the credits, because they never once introduced her in the film despite her having a number of speaking parts.

But hey! At least she made it to the end of the movie! The only other notable female character was brutally murdered.

This movie is unnecessarily violent (I like Tarantino films, don’t @ me). The violence was not for a means, it wasn’t for shock value, it wasn’t even a necessary part of the story. You had to sit so long with these disgusting bouts of violence that I wanted to squirm in my chair. I have permanent wrinkles from furrowing my brow at the screen.

Fleck also has this condition where he just laughs at random times. It was definitely supposed to show the duality of comedy and seriousness. Later, as Fleck turns into the Joker, it has a more "all the world’s a stage" feel. But it was clumsy and overused.

All the controversy aside, this movie felt much like someone’s first crack at storytelling, and that they felt needed the training wheels of a recognizable name like the Joker. But at its heart, this movie is a big middle finger to mental health.

I have never wanted to leave a movie so badly as when Fleck said he stopped taking his meds and he felt great.

To take the precariousness of mental health and inject this much violence into it after already establishing an otherness and a lack of social support is an incredibly dangerous narrative.

RELATED: Why is the internet crying this week? The new Joker trailer and childhood friends

I understand everything the movie was trying to set up because you couldn’t help but understand the messages it was suffocating you with. Bruce Wayne is seen in this movie as just a kid and you see the iconic scene where his parents are killed. Truthfully this movie was so awful and clunky I am amazed that they didn’t have Fleck do it himself, but I understand what they’re getting at.

I understand that you’re supposed to question whether there is just one Joker, or if his madness spread and caused civil unrest which would give to Gotham numerous Jokers. I understand that the end of the movie was supposed to leave you hanging as to whether it was all real or not — perhaps a call back to “The Killing Joke,” the infamous and controversial Batman comic written by Alan Moore which is the backstory for the Joker in the comics.

I get that it is a look at one of the most famous villains to ever grace the pages of a comic book or movie screen. I get that it was supposed to be real and gritty.

RELATED: A list of everyone who has worn the cowl besides Bruce Wayne

There is enough of that in the world. I don’t need it in a movie.

I spent almost two hours for no character growth, and for the plot progression to lead to more bedlam, just watching a man with mental illness get treated like crap before he smothered his mother with a pillow for like four minutes.

The Joker is a notoriously controversial character. I think back to “The Killing Joke,” which was so controversial because it left the ending open to interpretation as to whether Batman killed the Joker or not. In that story, the Joker rapes and hurts Barbara Gordon. She ends up paralyzed and becomes Oracle because she can no longer fight as Batgirl.

Alan Moore later came out and said he regretted writing that because it was too physically violent. He said that there was no going back to the innocence of comics after that. Moore went on to say that dark and gritty comics like “Watchmen” used to be a novel concept, but essentially that they were tired and old now. Looking to Moore, the father of the Joker’s backstory, and reading about his regrets, I asked myself "Why does this movie need to be made?" pretty early on.

However, I will admit that the trailers made it seem exciting. But the buzz for me turned sour pretty quickly. However, with a great cast like Joaquin Phoenix, Robert DeNiro and Zazie Beetz I was still a smidge hopeful.

Then Phillips came out with all these interviews where he blamed “woke culture” for killing comedy and I thought, "Oh no."

It was truly worse than I could have imagined. If you’re the kind of person who says "a movie is a movie" I respect your position. But I think the situation is more complicated than that.

Just like anything else, by seeing someone who feels and understands the world as you do it normalizes whatever behavior they are portraying. In the case of Arthur Fleck, the people who will relate to him and see his world view are people who feel like the world has not given them enough and that acting out violently is a way to get the attention that they deserve.

We see narratives like this in real life all the time. These real-life narratives have consequences: body counts and broken hearts. I don’t see the need to tell that fictional story.

Save your $15 for another film. Or better yet, donate it. I donated mine to a cause I found worthy.

To Joaquin Phoenix’s credit, he does odd well and that was no exception here.

I give this movie a "just rewatch 'The Dark Knight' instead" out of five.

Thank you to the Beaverton AMC for hosting a press viewing of this movie before it hit theaters.

Destiny Johnson is a digital reporter at KGW. You can follow her on Twitter to see the trolls that roll in because she knows they will after this article. She also reviews comic books, talks about nerd news and interviews cool people on YouTube.com/KGWcomics.